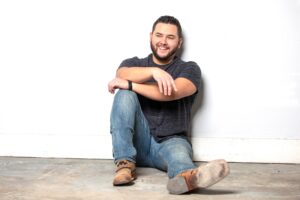 Timmy Brown does it again with an acoustic spin on his 2016 debut single “Lil Bit.” After a successful debut full-length album release earlier this year, Timmy is not slowing down and is still bringing new music to his strong fanbase. Listen to the song here!

This acoustic version slows down the originally upbeat song and gives it a more sentimental tone. With this new spin on his original, Timmy Brown proves that he still has more to offer with every release. The clever lyrics put a modern twist on a traditional country song. Timmy seems grateful for the small things in life and this acoustic version is the perfect sound for a slow summer night.

“I thought it would be fun to bring back my first ever released song ‘Lil’ Bit’ as an acoustic version, after releasing my first full-length album Good Life. It’s always been one of my favorites and most requested original songs at my shows. It was great revisiting the song in the studio after working hard on my sound over the last couple of years!” says Timmy.

The reviews came in strong for the rising singer/songwriter’s album Good Life. Renowned music critic Robert K. Oermann says “I think he has the goods.” American Songwriter said the album “paints a truly authentic portrait of an emerging artist.”

About Timmy Brown
Timmy Brown is a singer, songwriter, and recording artist from Norton, Massachusetts and is best known for his dedication to creating expressive and energized country music. Brown’s debut EP Leave This Town was released in April of 2016 and on April 18th of that year Timmy’s first single, titled “Lil Bit,” was released on iTunes where it reached the Top 100 charts in a matter of twenty-four hours. In the fall of 2017, Brown auditioned for Season One of the “American Idol” reboot on ABC and finished in the top sixty contestants. His infectious energy, talent, and enthusiasm have made him a local favorite throughout the New England area. In 2019, Brown was voted New England Country Music’s Local Male Artist of the Year for the fourth year in a row. Timmy Brown has opened for a number of popular artists including Dustin Lynch, Kane Brown, LANCO, and Lindsey Ell. Brown’s latest album Good Life, produced by Josh Gleave, released in 2021 with a track-list of ten first-class, brand new songs. Track four from the album, “Play It By Beer”, will appear as the album’s single and accompanied by a new music video that will be released later this month. Also appearing on Good Life is “If You Were Here” dedicated to Brown’s beloved grandmother, who pushed Brown to pursue his dream of a music career. Brown’s dedication and love of music is evident when he is performing on stage. It is his devotion to the country genre and his natural ability to draw in and connect with his audience that has earned Brown such a loyal fan base.