New Track “Just The Way I Am” Out Now 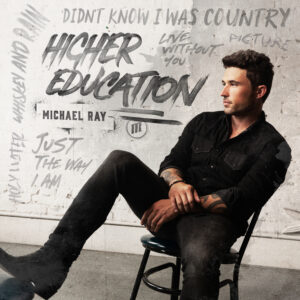 Warner Music Nashville signed Michael Ray in early 2014 after hearing about the kid from Florida booking his own shows (200+ a year), packing them out and doing so with original material playing on country radio without a major promo team fueling its momentum. Long a student of country music, now having essentially earned his doctorate, Ray shares what he has learned those many years on the road on his first new project since 2019’s Amos. Higher Education EP is due August 27. Pre-order / pre-save the album HERE.
“I’ll never forget that time in my life when I was fresh out of high school, working a trade I expected to do all my life — splicing cable — and Amos, my grandfather, recognized how much I loved writing and singing Country music,” says the Eustis, Florida native. “He said, ‘you can either look back and say ‘Damn, I wish I would have,’ or ‘Damn, I’m glad I did,’ and the latter is a whole lot easier to live with.’ With that, my band and I made the move to Music City. The next five years I leaned on the insanely talented writers, musicians and touring artists I knew, and the five+ after that I have leaned on this town. I am proud to know them the way I do, to have learned from them, and for them to know me.
“Higher Education is about going through life and the hard knocks that make you who you are … coming out of it stronger, having let it change you without hardening you. This album reminds me that even though we all go through hard times, we grow and we’re better for it.”
The final advance ahead of Higher Education’s release is the Michael Hardy, Ben West, Josh Miller-written “Just The Way I Am” (listen HERE and watch the music video HERE).
Might slow it on down
And wave at a passerby
Hug your neck say “I love ya”
‘Stead of sayin’ goodbye
And
I might cuss a little more
Then I probably should
I’m a poor man’s Hemingway
Back in the woods
Higher Education also features current single “Whiskey And Rain,” praised by Rolling Stone for “embracing a natural throwback country sound (listen HERE). “Whiskey And Rain” is Top 25-and-climbing at country radio as it tops 40 million on-demand streams.
1.    Whiskey And Rain (Josh Thompson, Jesse Frasure)
2.    Just The Way I Am (Michael Hardy, Ben West, Josh Miller)
3.    Holy Water (Ashley Gorley, Hunter Phelps, Ben Johnson, Michael Hardy)
4.    Picture (Michael Ray, David Garcia, Michael Hardy)
5.    Higher Education feat. Kid Rock, Lee Brice, Billy Gibbons and Tim Montana (Tim    Montana, Derek George, Jeremy Bussey, Monty Criswell, Frank Rogers)
6.    Live Without You (Michael Hardy, Jessi Alexander, Corey Crowder)
7.    Didn’t Know I Was Country (Michael Ray, Taylor Phillips, Ashley Gorley)
Earlier this summer Ray previewed the new project with perhaps his most personal song to date, “Picture” (listen HERE) Ray co-wrote the day of his Uncle Terry’s memorial following his untimely passing. American Songwriter applauds it “captures both the existential crisis and the understanding to celebrate life that often comes during the grieving process,” while MusicRow boasts, “Because one day all you will have is the memory and a photo. A lovely sentiment, a pretty melody and a sincere performance. What’s not to love?”
Catch Ray on the road with his Just The Way I Am 2021 Tour as it continues tomorrow night in Gillette, Wyo. and wraps in the fall at the Tortuga Music Festival in Ft. Lauderdale, Fla. Tickets are available at MichaelRayMusic.com.
https://nashvilleinsider.tv/wp-content/uploads/2021/07/MR_HigherEducation-FNL-scaled.jpg 2560 2560 Michael Glynn https://nashvilleinsider.tv/wp-content/uploads/2018/04/logo-yes.png Michael Glynn2021-07-30 18:16:052021-07-30 18:16:05MICHAEL RAY REFLECTS ON HIGHER EDUCATION WITH BRAND NEW EP
0 replies