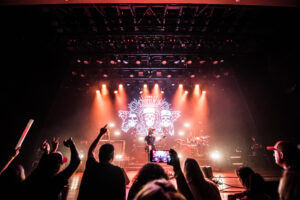 Truly a product of their raising, THE CADILLAC THREE returned to their hometown of Nashville for a two-night stint at the Ryman Auditorium exuding the same fervor of their youth. Singer-guitarist Jaren Johnston, drummer Neil Mason and lap-steel guitarist Kelby Ray have been performing together since their high school days and officially celebrate a decade as TC3 with their 10th Anniversary Tour, which traverses the globe through December. Last night the always-amplified trio launched with signature “I’m Southern” as “Tennessee Mojo,” “Bury Me In My Boots,” American Slang,” “The Jam” and more followed. The palpable energy from their instinctive sonic tendencies and chart-topping songwriting rolled through a myriad of jams incorporating Country, Rock and Funk fusion.

“We’re grateful to be here with you all tonight in our hometown of Nashville, Tennessee! This past year has been hard on fans, families and independent venues so we’ve tried to help highlight these special rooms where so many memories – and for some of you, a few babies – are made,” joked Jaren. “It’s been a hell of ride with Neil and Kelby, but being back at the Ryman to play you all songs from over a decade of life is pretty badass!”

Last night’s (9/1) set kicked off with Hey Steve and Boy Named Banjo will heat up the crowd tonight (9/2). Also making a debut, TC3’s collaboration with Flytes Brewhouse on Country Buzz Beer. The honey amber ale, brewed with Cascade Hopes and honey (5.5% ABV) is available at Ryman concessions during TC3’s shows as well as the Pleasant View, TN brewhouse and select locations in Nashville and surrounding areas. More details on the brew here.

“I discovered Flytes on a motorcycle ride one day and quickly became a fan,” recounts Kelby. “Fast forward about a year and it turns out, owners John and Trish Nelson are actually fans of ours too so we all thought it would be pretty cool to create something. We all got together and created our own unique flavor! Country Buzz Beer is just like us – unexpected, refreshing and a little buzzed! If you’re a beer fan, you’ll love Country Buzz!”

TC3 has remained resolute in their creativity, releasing two albums in 2020 – February’s COUNTRY FUZZ and October’s surprise TABASCO & SWEET TEA – hosting COUNTRY FUZZ RADIO and serving the music community. “The Cadillac Three’s contribution to a year like no other can be measured in albums released, songs released (28), live-streamed shows recorded, donations collected, venues supported, mouths fed, and positive messages sent. Landing a spot on the revered list [ACM Awards], among their friends, collaborators, and peers, feels like a victory for the trio who has never stopped putting in the work,” observes AMERICAN SONGWRITER. With “Long After Last Call” Rolling Stone noted TC3 “Sound the Alarm for Clubs in Crisis” while their “Bridges” music video shoot teamed up with Music Venue Alliance Nashville.

Neil shares, “playing music together and figuring out life on the road is all we’ve known for most of our lives. Jaren, Kelby and I are hopeful and really happy to be back on the stage seeing familiar faces in the crowd and some new ones singing along. Stay safe everyone!”