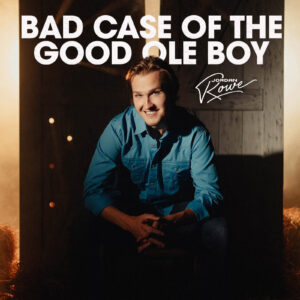 The star-studded song “10-4” was released as part of his debut album and was tapped as Rolling Stone’s ‘Pick of the Week’ with a “Nineties icon stamp,” landing Rowe on Spotify’s New Traditions: Country Heroes playlist and Apple Music’s Country Risers playlist, among others.

Edited by Emma Kate Golden and recorded by Golden and Marisa Taylor, the video follows along as Rowe and the esteemed legends go in the studio to record “10-4.” “In a type of torch-passing event” American Songwriter shares, “the country stars shared wisdom with the quickly emerging act, ensuring the sanctity of preceding generations of country musicians.” “To watch them be in their element, and think about ‘Paint Me A Birmingham’ or ‘Something To Be Proud Of,’ some of my favorite songs of all time. I kind of got to feel like I watched how those songs were made,” Rowe tells American Songwriter.

Since its Aug. 6 release, Bad Case of the Good Ole Boy has racked up over 2.3M streams and garnered critical acclaim from Rolling Stone, CMT, American Songwriter, Country Now, Sounds Like Nashville and Taste of Country. This summer, the “gritted artist with a story to tell” (American Songwriter) has been performing throughout the Southeast alongside newcomer Reid Haughton and touring sensations Cody Johnson and Jon Pardi. This Fall, Rowe will hit the road with Dwight Yoakam and Jameson Rodgers.

In celebration of his debut album, Rowe will take over The Stage on Broadway on Wednesday, Sept. 29 at 6 p.m. for his first full-band show. Industry and media are asked to RSVP here. For more information, visit jordanroweofficial.com or follow him on TikTok, Instagram, Twitter, Facebook, and YouTube @jordanrowemusic.

About Jordan Rowe:
Jordan Rowe’s love for music and dream to become a successful Country artist began when he was just a kid in the small town of Adel in the heart of South Georgia.

His artistry has been described as “traditional as Alan Jackson, but as fresh, young, and fun as Jon Pardi.” He grew up listening to artists such as Joe Diffie, Alan Jackson, and Luke Bryan— all of who have played a major role in how he has crafted his sound. Rowe studied agribusiness and music business at the University of Georgia. While attending college five hours from music city, he would travel back and forth on breaks and weekends to intern at River House Artists. He began to write with some of country music’s most recent hit songwriters such as Ray Fulcher, Thomas Archer, and Cole Taylor and has since made the move to Nashville in 2019.

Rowe’s debut album Bad Case of the Good Ole Boy dropped on Aug. 6 and includes features from some of Nashville’s hottest rising artists and Country legends. Produced by Derek Wells, the new record showcases Rowe’s ability to mix progressive production with modern twists while staying true to his traditional roots.