COVERS FROM THE BROTHERS ON OCT. 15

PRE-ORDER COVERS FROM THE BROTHERS HERE

‘Covers From The Brothers’ Includes Lead Single “I Can Help” Feat. Dennis Quaid 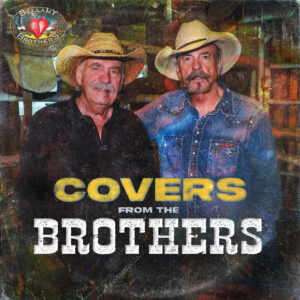 After releasing more than 50 albums over the past 40-plus years, the Bellamy Brothers are set to release their first-ever, covers-only album, Covers From The Brothers, on Oct. 15. Fans can pre-order the album now and instantly receive the Bellamys’ cover of Billy Swan’s smash-hit “I Can Help” featuring Dennis Quaid.

No strangers to crossover success, the Bellamy Brothers transcend genres on Covers From The Brothers, which also includes everything from some of their favorites by Bob Dylan (“Knockin’ on Heaven’s Door”) and Stevie Wonder (“I Just Called to Say I Love You”) to the songs they performed countless times in their early bands like “Games People Play” (Joe South).

“I Can Help” featuring Dennis Quaid was released as the project’s lead single on July 9 along with a video to accompany the “rollicking track” (Taste of Country). The Bellamys filmed the video during their recording session with Quaid where they “got to witness a transformation that crossed a veteran actors’ creative process with his lifelong love of music (Wide Open Country).” People.com premiered the video, filmed by Derrek Kupish of dkupish productions, while the trio debuted their live version on the Grand Ole Opry.

The Bellamy Brothers were inspired to record an entire album of covers after a label in Switzerland asked them to cut a couple of covers for a duets project. Produced by the Bellamy Brothers and Randy Hiebert, the 12-song collection also includes the talents of Paul Franklin from Vince Gill’s band and Jenee Fleenor from Blake Shelton’s band. Covers From The Brothers follows the Bellamys’ 2020 Bucket List EP that included their collaboration with John Anderson, “No Country Music For Old Men,” which has amassed over 3 million views.

When the stay-at-home orders took effect in March of 2020, the Bellamy Brothers were on Blake Shelton’s Friends And Heroes Tour. They returned to their Florida homestead where their hit reality series, “Honky Tonk Ranch,” is filmed and stayed busy through a partnership with the Florida-based medical marijuana company Trulieve on their Old Hippie Stash flower product line. The Bellamys recently celebrated the one-year anniversary of that partnership and are back on the road performing to fans across the country and gearing up for their 2022 European tour.