DUE OCTOBER 29 AND AVAILABLE TO PRE-ORDER NOW 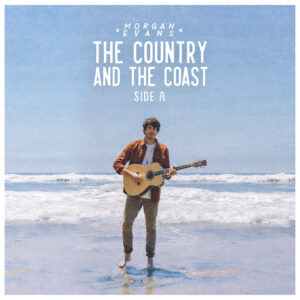 Australian-born country phenom Morgan Evans delighted fans today by announcing his forthcoming EP, Country And The Coast Side A, set for release on October 29 (PRE-ORDER HERE). To celebrate, his brand-new song “Country Outta My Girl” is also available everywhere today (LISTEN HERE). Written by Morgan Evans, Ben Johnson, Hunter Phelps and Mark Holman and produced by Dan Huff, the track is featured on the new project alongside his current single, “Love Is Real” (LISTEN HERE), which has spent six consecutive weeks at the top of the AU Country Radio chart and is climbing the U.S. airplay charts now.
Evans is currently traveling across the country with Brett Eldredge for his Good Day 2021 Tour. Known for taking the stage solo, engaging the audience with instrumental mastery and a pedal loop, Evans is now joined by a full live band for the first time since he moved to America.
In addition to writing and releasing his own new music, Evans has been sharing his global perspective on country music and showcasing performers from all over the world as the host of Country Wide Radio on Apple Music. Named one of Country Radio Seminar’s elite 2020 New Faces of Country Music, the up-and-coming star has earned nearly 610 million global career streams to date. He topped the charts with his debut single “Kiss Somebody” and spent 25 weeks in the coveted No.1 spot in Australia with fan favorite track “Day Drunk.” Both hail from his critically lauded debut album Things That We Drink To, which took home the award for Best Country Album at the ARIA Music Awards in Australia.
The Country And The Coast Side A
1.    “Love Is Real”
2.    “Country Outta My Girl”
3.    “Beautiful Tonight”
4.    “American Dream Truck”
5.    “Sing Along Drink Along”
6.    “Love Is Real”
https://nashvilleinsider.tv/wp-content/uploads/2021/09/MorganEvans.jpg 2048 2048 Michael Glynn https://nashvilleinsider.tv/wp-content/uploads/2018/04/logo-yes.png Michael Glynn2021-09-24 20:56:062021-09-24 21:09:43MORGAN EVANS ANNOUNCES ‘COUNTRY AND THE COAST SIDE A’ EP
0 replies