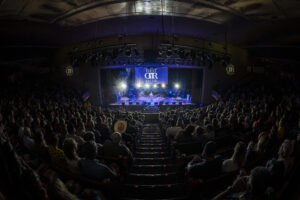 Nearly 15 years after first visiting St. Jude Children’s Research Hospital® where he was immediately inspired to pledge his support, three-time GRAMMY Award winner Darius Rucker continues to give back to the mission, surpassing the $2.5 million mark in his fundraising efforts with this year’s 12th annual “Darius & Friends” benefit concert on Tuesday night, preceded by his corresponding golf tournament and silent auction on Monday morning. This year’s event alone raised more than $410,000, bringing together a sold-out audience at the historic Ryman Auditorium with at-home fans watching via the Mandolin live stream.

Reflecting on his first visit to the hospital in 2008 to the Tennessean ahead of this year’s show, Rucker noted, “You see these kids who are sick, and they’re so happy to be there, because their caregivers are so loving and giving to them. And then you find out that nobody ever gets a bill. That blew me away. I was just like, ‘We’ll figure out some way to help you guys as much as I can.’”

Now, more than a decade later, that effort has become an annual tradition. The benefit concert, which typically serves as an unofficial kickoff to CMA Fest as fans descend on Music City each summer, was hosted virtually in 2020 due to the ongoing pandemic. In returning home to the iconic Ryman Auditorium this year, the live stream was also kept in place to allow fans at home to tune in alongside the sold-out audience who were treated to a surprise lineup of stars featuring Jason Aldean, Brothers Osborne, John Daly, Keb’ Mo’, Runaway June and Elvie Shane.

After a silent auction and live donation round, Rucker kicked off the musical festivities with a trio of hits – his Platinum-certified No. 1s “This” and “For the First Time” followed by current single “My Masterpiece” – before introducing the first friends of the evening.

“I’ve been in this town for 12 years and I’ve gotten to know a lot of people,” Rucker noted, “but some people you get to really know and they become family. These guys are family.” With that, the Ryman audience gave a rousing welcome to six-time GRAMMY nominees Brothers Osborne, who brought a high-energy performance of their hits “It Ain’t My Fault,” “I’m Not For Everyone” and “Shoot Me Straight.”

“You’ve got to drop the name and tell the story, right?” said Rucker as he returned to the stage, sharing the tale behind an Ed Sheeran cowrite that resulted in brand new song “Sara,” a where-are-they-now ode to Rucker’s fifth grade girlfriend. He then thrilled the crowd with his Double Platinum-certified No. 1 “Alright” before introducing newcomer Elvie Shane, making his Ryman debut with an emotional performance of current Top 10 single “My Boy,” which drew a standing ovation from the audience, and keeping the crowd on their feet with upbeat anthem “Keep On Strummin’.”

“I was working retail in the early Hootie days, selling records,” shared Rucker as he returned to the stage, “and this song by Nanci Griffith was playing one day. It blew my mind, and it started my love for Country music… Years later, my mom had a heart attack and went into a coma. I sat in that hospital room for eight hours and I sang this song over and over. This week Nanci died. She’s one of my great friends and I want to play this song because it means so much to me,” he noted, before performing an emotional rendition of “I Hope It Rains” in tribute to his late friend.

Rucker then invited yet another surprise guest to the stage, sending the audience into a frenzy as he introduced legendary golfer John Daly. Together, they performed a rousing rendition of “Knockin’ On Heaven’s Door” before Rucker continued with his hits “Homegrown Honey” and “If I Told You” as well as Hootie & the Blowfish classic “Hold My Hand.”

“I would do anything for him, and I know he’d do anything for me,” shared Rucker of his next guest, introducing three-peat ACM Entertainer of the Year Jason Aldean. “He did me dirty making me follow a Hootie song,” joked Aldean, before noting “Darius really is one of the nicest, coolest guys in town and so it’s a pleasure to be here, especially for St. Jude.”

Sitting on a stool and accompanied by a single guitar player, Aldean thrilled the crowd with stripped-back versions of his 3x Platinum No. 1 hit “Big Green Tractor” and Gold-certified No. 1 “Any Ol’ Barstool.” Rucker then returned to the stage to perform “Radio” and Hootie hit “Only Wanna Be With You,” ahead of introducing the penultimate guest for the evening; five-time GRAMMY Award winner Keb’ Mo’, who wowed with “Rita” and “I Remember You” before inviting Rucker back for a duet of the Marvin Gaye classic “What’s Going On,” earning a sustained ovation from the crowd.

Rucker kept the Hootie & the Blowfish nostalgia coming as he performed “Let Her Cry” under a single spotlight, accompanied by a violin and the chorus of a sold out Mother Church audience, before continuing the singalong with his latest No. 1 hit, “Beers And Sunshine.” He then introduced the final surprise guests of the evening, bringing trio Runaway June to the stage for their Ryman debut. The CMT “Next Women of Country” thrilled with their Top 5 hit “Buy My Own Drinks” and gave fans a preview of brand new music out this Friday with “T-Shirt” before inviting the audience to sing along for their rendition of the Tom Petty classic, “American Girl.”

Rucker closed out the main entertainment of the evening with his Platinum-certified No. 1 “Come Back Song” before returning to the stage for an encore that included a cover of “Valerie,” with Rucker backed by the powerful vocals of his keys player’s wife, Tiffany Turner, and an upbeat performance of album cut “Hands On Me.” The evening then ended according to tradition, with Rucker joined by the sold-out Ryman crowd for a “Wagon Wheel” singalong, the feel-good energy throughout the auditorium symbolic of the night as a whole.

The annual fundraising event, made possible with support from generous sponsors PGA TOUR, CDW, Hendrix Enterprises, UMG, CAA, A. O. Smith, AMD, Arrow and Intel, helps ensure families never receive a bill from St. Jude for treatment, travel, housing or food – because all a family should worry about is helping their child live.

For more information, visit www.DariusRucker.com and follow on social media @DariusRucker. Fans can also continue to donate to St. Jude in honor of “Darius & Friends” HERE and photos from the event are available HERE.

About Darius Rucker
Rucker first achieved multi-Platinum status in the music industry as lead singer and rhythm guitarist of the GRAMMY Award-winning band Hootie & the Blowfish, who have sold more than 25M albums worldwide including their Diamond-certified debut Cracked Rear View, which remains among the Top 10 best-selling studio albums of all time. Since releasing his first Country album in 2008, Rucker has earned a whole new legion of fans with four No. 1 albums on the Billboard Country chart, including RIAA Platinum-certified Learn to Live and True Believers, plus ten No. 1 singles at Country radio and 11 Gold, Platinum or multi-Platinum certified hits. In 2014, Rucker won his third career GRAMMY Award for Best Solo Country Performance with his 9x Platinum version of Old Crow Medicine Show’s “Wagon Wheel,” one of the top five best-selling Country songs of all time. He recently co-hosted the 54th annual CMA Awards and topped the charts at Country radio once again with “Beers And Sunshine” in February. Follow up single “My Masterpiece” is available everywhere now as Rucker puts the finishing touches on a forthcoming album.

As a lifelong philanthropist, Rucker supports the MUSC Children’s Hospital in his hometown of Charleston, South Carolina and has also raised millions of dollars for St. Jude Children’s Research Hospital through his annual “Darius & Friends” benefit concert and golf tournament. Rucker has also advocated for over 200 charitable causes supporting public education and junior golf programs in South Carolina through the Hootie & the Blowfish Foundation and serves as a National Chair for the National Museum of African American Music in Nashville.

About St. Jude Children’s Research Hospital®
St. Jude Children’s Research Hospital is leading the way the world understands, treats and defeats childhood cancer and other life-threatening diseases. Its purpose is clear: Finding cures. Saving children.® It is the only National Cancer Institute-designated Comprehensive Cancer Center devoted solely to children. Treatments invented at St. Jude have helped push the overall childhood cancer survival rate from 20 percent to more than 80 percent since the hospital opened more than 50 years ago. St. Jude won’t stop until no child dies from cancer. St. Jude freely shares the discoveries it makes, and every child saved at St. Jude means doctors and scientists worldwide can use that knowledge to save thousands more children. Families never receive a bill from St. Jude for treatment, travel, housing or food – because all a family should worry about is helping their child live. Visit St. Jude Inspire to discover powerful St. Jude stories of hope, strength, love and kindness. Join the St. Jude mission by visiting stjude.org, liking St. Jude on Facebook, following St. Jude on Twitter, Instagram and TikTok, and subscribing to its YouTube channel.

Stephanie Quayle Evokes Love and the Spirit of the American West With Latest...