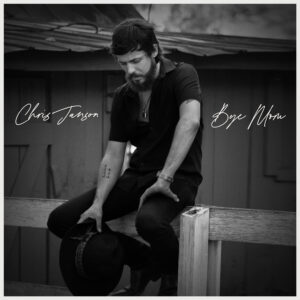 Electrifying entertainer Chris Janson is perhaps best known for his collection of party-starting No. 1 hits and famed high-octane performances that have inspired superstar Garth Brooks to declare, “This guy has ‘it’ and he knows what to do with it” – but when he has something on his heart, he opts for a different approach. Janson first shared the more introspective side of his acclaimed songwriting with the ACM award-winning, Gold-certified “Drunk Girl” in late 2017. For his newest single “Bye Mom” – available now (listen HERE) – he once again turns inward, this time to share a triumphant ode to unconditional love.
The single is derived from the real-life story of co-writer Brandon Kinney, who lost his mother earlier this year. He, alongside longtime friend Janson, put the experience into lyrics as a tribute to his mom; together they turned the song into a message not just about loss, but also about loving someone more than yourself. Whether from a mother, father, brother, sister, friend or lover, “Bye Mom” gently opines that everyone deserves to feel that kind of immeasurable love.
“My co-writer Brandon and I wrote ‘Bye Mom’ this year after he lost his mother,” Janson shared. “Even though it was written as a tribute to one special person, I think this song is universal. At its core, ‘Bye Mom’ is about unconditional love – ‘you don’t realize you’re somebody that somebody loves more than themselves.’ Whether it’s from a mom or someone else, everyone deserves to experience that kind of love.”
“Bye Mom” is the first single from Janson’s upcoming fourth studio album and is due at radio next month. The celebrated recording artist joined Warner Music Nashville in 2015 as his now 3x Platinum, chart-topping smash “Buy Me A Boat” became a viral and now perennial sensation. Over the past six years he has earned three additional No. 1 hits, been invited to become a member of the esteemed Grand Ole Opry and more. He has garnered upwards of seven billion airplay impressions and over 1 billion on-demand career streams to date.
A visible ambassador for and champion of the country music community, Janson will take the historic stage at the Ryman Auditorium on August 25 for the14th Annual Academy of Country Music Honors as both performer and presenter. He will help commemorate the incredible behind-the-scenes talent of country music via the ACM Industry and Studio Recording Awards. The event, which will air as a television special later this year, will be livestreamed on Circle Network’s social channels – Circle All Access Facebook, Twitter and YouTube.
The following week, the larger-than-life stage-shaker will make his Bonnaroo debut. He will cap the Grand Ole Opry at Bonnaroo 2021 event on Thursday, Sept. 2 with a finale performance. Meanwhile, Janson is on the road for his Back At It tour dates. The run spans nearly every single weekend from now through October and features headlining performances, festivals, fairs and special events. For tickets and more information, visit https://www.chrisjanson.com/tour.
https://nashvilleinsider.tv/wp-content/uploads/2021/08/210715_ChrisJanson_RS_1270.jpg 1920 2400 Michael Glynn https://nashvilleinsider.tv/wp-content/uploads/2018/04/logo-yes.png Michael Glynn2021-08-20 17:26:222021-08-20 17:28:48CHRIS JANSON SHARES TESTAMENT TO UNCONDITIONAL LOVE IN NEW SINGLE “BYE MOM”
0 replies

COUNTRY SINGER JENNY TOLMAN TO APPEAR ON TLC’S “SAY YES TO THE ...
Scroll to top