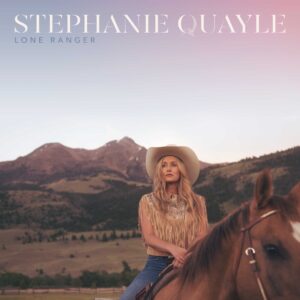 Big Sky Music Group recording artist, Stephanie Quayle, has released her latest single, “Lone Ranger,” available now. With a sound matching the spirit of the unbridled West and a message of finding that epic love – the one that no other can match – “Lone Ranger,” written by Quayle, Andrew Scott Wills and Rick Huckaby, immediately grabs you by the heartstrings and leaves you with the feeling of romantic grandeur of a love for the ages.

“This song is guttural when you soak it up and truly feel the weight of the lyrics,” says Stephanie. “When I think about the kind of love that is so strong — so irreplaceable — that you’d rather be alone than with anyone else, that is that ‘once in a lifetime love.’  This song is a symbol of that statement, that sentiment. You’ve branded my heart so good; you’ve ruined me… it’s unbridled and intense — until forever ends.”

Recently, Stephanie announced she is teaming up with iconic boot brand, Lucchese Bootmaker, on a signature line of Western lifestyle inspired boots and will be the face of the brand’s upcoming Fall and Winter retail campaigns. Stephanie embodies the Western lifestyle and Lucchese in every way – from growing up on the boundless frontier of Montana, working on her North Carolina based, Summerfield Farms, and her inviting and connective performances on stages across the country.

Stephanie will also be headlining the Lucchese Listener Lounge Series which will include stops in Houston, College Station, Frisco, Fort Worth, Denver and Santa Fe – with additional stops to be added. Each performance will be a powered acoustic set to create an intimate and unique experience for Lucchese customers.

Big Sky Music Group recording artist, Stephanie Quayle. has had a massive presence at country radio garnering over 100 million audience impressions and ranking Top 10 in Current Female Airplay with standout singles “Whatcha Drinkin ‘Bout” and “Selfish” in the last few years. The CMT “Next Women of Country” inductee has been tapped as a Grand Ole Opry darling, making multiple appearances into the iconic circle and performing on the historic Ryman Auditorium stage. Quayle was included in the star-studded weeklong line-up to celebrate Dolly Parton’s 50th Anniversary of being a Grand Ole Opry member. The entertainer has shared stages with artists like Willie Nelson, Bonnie Raitt, Aaron Watson, LOCASH, and many more; and in a once in a lifetime opportunity, the charismatic performer was the only independent act invited to perform for the five living former U.S. presidents (Obama, W. Bush, Clinton, H.W. Bush and Carter) alongside artists like Lady Gaga and Alabama as part of the hurricane relief concert “Deep from the Heart: The One America Appeal” in Texas. The singer-songwriter’s booming personality has also been tapped as a special guest host for Wrangler Network, the Circle Network, Sounds Like Nashville, and One Country on the ACM Awards, CMT Awards and CMA Awards red carpets. She has been highlighted in People, Huffington Post, Glamour, Hollywood Life, Inspirer Magazine, Taste of Country and Billboard.com, to name a few. Quayle was recently named the First Female Country Music Ambassador for Bass Pro Shops & Cabela’s, and also serves as music ambassador for Murdoch’s Ranch & Home Supply, an original store from her hometown of Bozeman, MT. She has teamed up with national brands Lucchese Bootmaker, Harley-Davidson, Kampgrounds Of America (KOA), Winnebago, Wrangler, and Running Iron Whiskey. She is an active supporter of charitable organizations like the American Heart Association’s Go Red for Women movement, Care Camps, and St. Jude Children’s Research Hospital.