Album Earns More Than 6 Million Streams on Its Debut 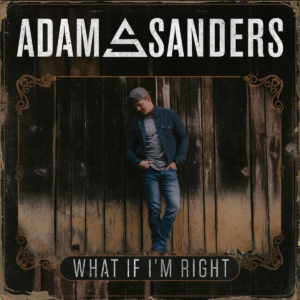 Country music artist and highly-sought after songwriter Adam Sanders released his debut full-length album What If I’m Right, on May 21st amassing more than 6 million album streams to date. The independent artist who has written hits for Country artists such as Dustin Lynch, Luke Bryan, and Cole Swindell is “stepping into the spotlight” (Billboard) and staking his claim with his debut album. What If I’m Right was featured by Billboard’s First Country, Rolling Stone Country’s Music Picks, The Boot, Taste Of Country and American Songwriter. What If I’m Right is currently available at digital retailers everywhere, listen here: https://smarturl.it/WhatIfImRight

Ahead of the official album release, People.com shared his NASCAR-inspired song “Daddy Jesus And Earnhardt,” noting “it is a song that could go and make Sanders a country music superstar.” Sanders co-wrote all thirteen tracks across the album, including his title track “What If I’m Right” his driving, blue-collar anthem “Do What We Do” and contemplative ballad “Bible Verses.”
Marking milestones along the way, Sanders has earned his reputation as an artist to watch, amassing over 100 million streams, over 70,000 singles sold, and landing in the Top 40 of the Current Country Albums Chart. Out of the gate, the title track “What If I’m Right” was quickly added to Hot Country ATV Playlist, Next From Nashville, Breakout Country and Fresh Finds Playlist, Pandora’s New Country Now and Apple Music’s Country Music Risers, and has tallied well over a whopping 1,000,000+ streams to date. Billboard called it another “surefire winner” and Rolling Stone noted, “a meaty production of big drums and bigger guitars, with an emphasis on how it’ll play on radio and for the seats at the back of the arena.”
As “one of Music Row’s hottest young songwriters” (American Songwriter), the Lake City, FL native is currently signed to a co-publishing deal with Round Hill Music Nashville. What If I’m Right follows his previously released Adam Sanders (Live), his “infectious tune (Billboard),” “Ruled The World,” “the mid-tempo, retro-cool song (Taste of Country),” “Make Em Wanna Change,” and the “catchiest of them all (Pop Culture),” “Drink Drank Drunk.” With overwhelming support from the artist and songwriter community, Sanders’ music video for “Ruled The World” featured seven singer-songwriters and a music video starring Tracy Lawrence, Aaron Tippin, Marty Raybon, and Mike McGuire. Sanders can be seen next on select headlining dates in Branford, FL (7/3) Quincy, IL (8/4) Springfield, IL (8/19) and Turlock, CA (9/25). For tickets and more information, visit http://www.adamsandersmusic.com/.
https://nashvilleinsider.tv/wp-content/uploads/2021/06/AdamSanders.png 1200 1200 Michael Glynn https://nashvilleinsider.tv/wp-content/uploads/2018/04/logo-yes.png Michael Glynn2021-06-03 22:14:102021-06-03 22:20:42Singer/Songwriter Adam Sanders Releases Debut Album What If I’m Right To Critical Praise
0 replies

Rhonda Vincent’s New Album ‘Music Is What I See’ Available...
Scroll to top