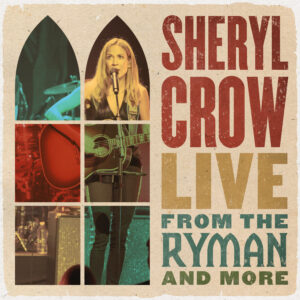 Since the first beat of her 7X PLATINUM-certified TUESDAY NIGHT MUSIC CLUB and self-titled Best Rock Album Grammy-winning follow-up, SHERYL CROW has created a sound that not only solidified her essential place in Rock but has impacted generations with a straightforward approach to life through her songs. Today the multi-instrumentalist releases LIVE FROM THE RYMAN & MORE, a 27-song set filled with tracks from her critically lauded THREADS and signature hits such as “Strong Enough,” “All I Wanna Do” and “Soak Up The Sun.” Captured on stages across the country in 2019, the collection via The Valory Music Co. is a potent reminder that Sheryl Crow still kicks ass.

Rock & Roll is at its best live, and that’s where the nine-time Grammy Awards® winner really delivers. LIVE FROM THE RYMAN & MORE transcends typical live album formulas, revitalizing Crow’s familiar hits with an array of guest performers and shifting dynamics. The pristine recordings transport the listener, delivering palpable energy that, although they might be on their couch or in their car, feels like the next best thing to a real live Sheryl Crow concert.

“There is a connection and community that is uniquely present at a live show – strangers singing in unison, fans shouting requests, even the occasional flubbed lyric and broken guitar string,” laughs Crow. “I’m grateful for moments like these and so happy we could put into them in this musical time capsule. My hope is that those same feelings flood back for listeners as the music plays.”

From the first propulsive downstrokes of “Steve McQueen,” Crow and her band bring the fire. Recorded over five nights at Nashville’s historic Ryman Auditorium, Los Angeles’ cutting edge Ace Theatre and the legendary Newport Folk Festival in Rhode Island, the songwriting superstar delivers a masterclass in Roots music — from Rock, Pop, Gospel, Blues that is psychedelic in places, Country leaning in others. Inspired collaborations find Brandi Carlile and Maren Morris harmonizing on “If It Makes You Happy,” Stevie Nicks defiantly strutting on “Prove You Wrong,” Emmylou Harris adding shimmering angst to “Nobody’s Perfect,” Jason Isbell joyously throttling Bob Dylan’s “Everything Is Broken” and Lucius creating a bluesy Gospel tension on “Run, Baby, Run.” The immediacy surges throughout the performances, but ultimately Crow’s voice and enthusiasm define these songs.

Crow performed “Soak Up The Sun” and “Real Gone” as part of ABC’s Good Morning America Summer Concert Series earlier today. Watch the interview and the “Everyday Is A Winding Road” bonus clip, plus join the online conversation with #SherylCrowOnGMA.