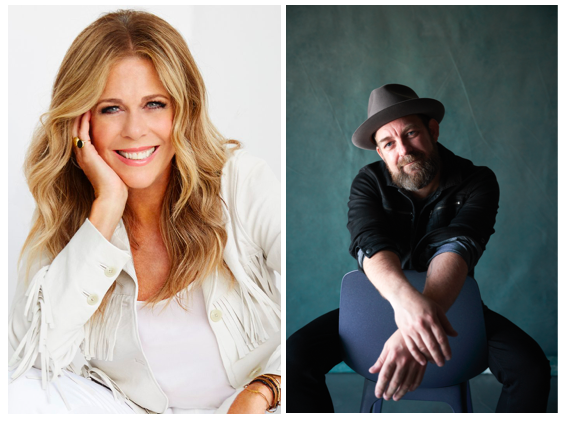 Rita Wilson and Kristian Bush will embark on a joint concert tour kicking off June 5 in Atlanta (see complete itinerary below).  Musical collaborators and good friends, Wilson and Bush will share both of their intimate and authentic songs with audiences, making for a memorable evening of live music.
Wilson — singer/songwriter, actress and producer — just released her forth and acclaimed studio album, Halfway To Home (Sing it Loud/The Orchard), and was also recently honored by The Hollywood Chamber of Commerce with a star on the Hollywood Walk of Fame. Oprah.com called the new album, “deeply personal,” and said it “highlights Wilson’s songwriting skills,” while CMT raved, “it’s genuine, and she’s poured her heart into every song.” “Throw Me A Party,” the first single, was premiered by Rolling Stonewho called it “evocative,” and Taste of Country noted the song has “touched everyone who has heard it.” The “moving” (People) music video was directed by Award-winningPatrick Tracy; watch it HERE.
Halfway to Home was largely recorded in Nashville, and co-produced by Rita and Nathan Chapman (Taylor Swift, Keith Urban), with Ron Aniello (Bruce Springsteen) and John Shanks (Bon Jovi, Sheryl Crow) also contributing as producers.  Many of the songs were co-written with an A-List group including Kristian Bush, Grammy winner Liz Rose, Mozella (Kelly Clarkson, Miley Cyrus), Mitch Allan (Demi Lovato), Kara DioGuardi (Pink, Kelly Clarkson) and Emily Schackleton. In addition to her dates with Bush, Rita will also be performing at such notable music festivals as Stagecoach (April 27), CMA Fest (June 7) and Lake Shake (June 21). Watch her recent performances on CBS’ The Late Late Show w/ James Corden here andNBC’s Today here
Kristian Bush is one half of the multi-platinum selling country duo Sugarland and has been leaving his mark on music for more than 2 decades. He is a Grammy Award-winning singer, songwriter, producer, playwright, podcaster, and instrumentalist who started his career with folk rock duo Billy Pilgrim. To date, Kristian has won six BMI Awards for his songwriting abilities, and in 2011 founded the music publishing company and songwriting collective Songs of the Architect. In 2015, he released his solo debut album, Southern Gravity, which featured the Top 20 single “Trailer Hitch”. Currently, Kristian sits on the board of the Atlanta Chapter of the National Academy of Recording Arts and Sciences, is a frequent performer on the Grand Ole Opry, continues to tour with Sugarland, and has been working on a new EP, coming out summer of 2019.