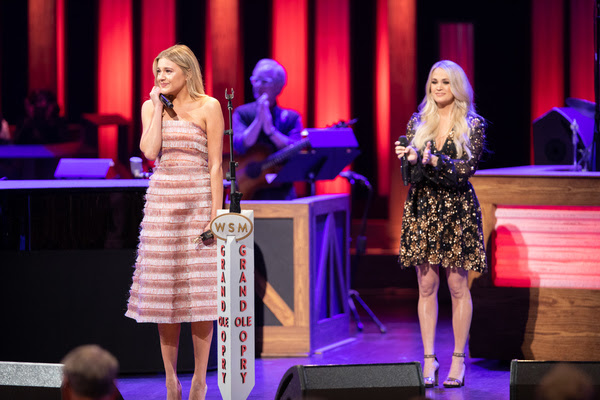 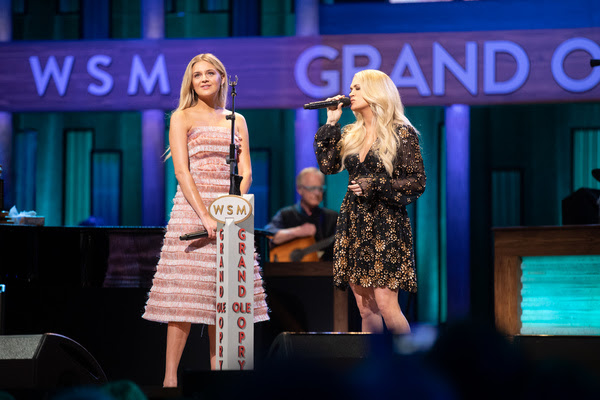 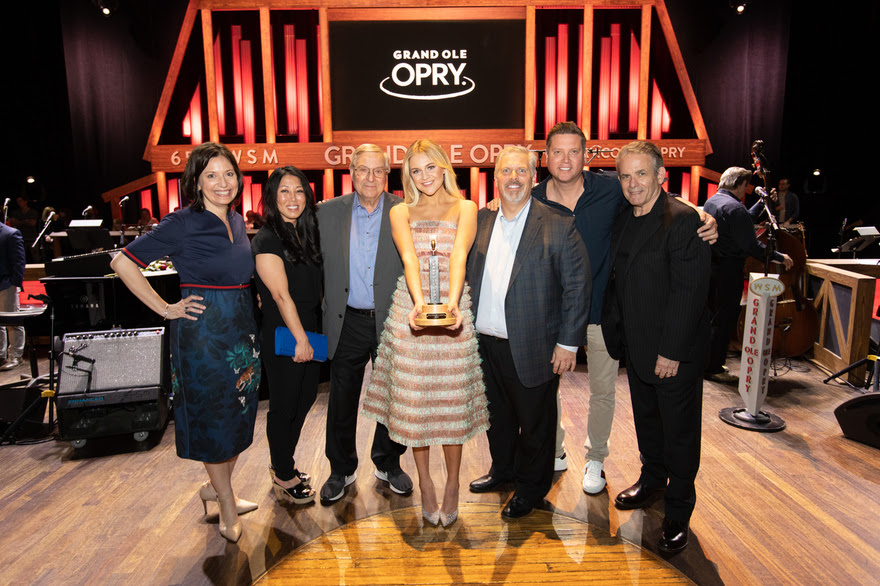 NASHVILLE, Tenn. – (April 16, 2019) – Kelsea Ballerini was inducted as the newest and youngest current member of the Grand Ole Opry tonight by Carrie Underwood, an Opry member since 2008.

Surprising the sold-out Opry House crowd after Ballerini had performed a three-song set, Underwood took the stage and said to Ballerini, “You have accomplished so much in your career, and you will undoubtedly accomplish infinite amounts more in your life. Awards, number ones, sales … this is better than all of that. This is the heart and soul of country music.”

Presenting Ballerini with her Opry member award, Underwood cheered, “I am honored to introduce and induct the newest member of the Grand Ole Opry, Kelsea Ballerini.”

After recounting her first visit to the Opry as a fan, her 2015 Opry debut, and subsequent Opry appearances, Ballerini held her award close and said, “Grand Ole Opry, thanks for seeing something in me and for believing that I’ll always love you like I do because I do, and I will.”

Ballerini and Underwood then teamed up for a duet on 20-year Opry member Trisha Yearwood’s 1992 hit “Walkaway Joe.”

Earlier in the night, CMA and ACM Entertainer of the Year Keith Urban, an Opry member since 2012, also made a surprise appearance to deliver congratulations to Ballerini and to perform his hit “Blue Isn’t Your Color.” Later in the show, Country Music Hall of Famer and 1991 Opry inductee Vince Gill surprised the audience yet again by joining in with his friends the Del McCoury Band during the group’s portion of the show.

“We are incredibly pleased to welcome Kelsea Ballerini into the Opry family,” said Opry General Manager Sally Williams. “As evidenced by the enthusiasm of the Opry members here tonight and the fans in the crowd, Kelsea and her music are much loved. She and her fellow members who made tonight so special show that the future of both country music and the Opry are in good hands.”

Two-time GRAMMY nominee Kelsea Ballerini is the only female artist in Country music history, including female duos and groups, to claim #1 with her first three consecutive singles: PLATINUM-certified, #1 smashes – “Love Me Like You Mean It,” “Dibs,” “Peter Pan,” from a debut album [GOLD-certified breakout THE FIRST TIME]. Nominated for Best Country Album at the 61st GRAMMY Awards, her acclaimed sophomore album, UNAPOLOGETICALLY, includes #1 hit “Legends” as a part of the original 12-track compilation all written or co-written by Ballerini. UNAPOLOGETICALLY (Deluxe Edition) features four fresh tracks including her collaboration with The Chainsmokers, “This Feeling,” which they performed during the 2018 Victoria’s Secret Fashion Show. With over 90 million streams globally, her current single “Miss Me More” is the award-winning singer-songwriter’s fastest-rising single to date on Country radio. The Black River Entertainment artist just supported Kelly Clarkson’s MEANING OF LIFE TOUR and is now on her first-ever headline arena trek – THE MISS ME MORE TOUR – with Brett Young (plus special guest Brandon Ratcliff).

About The Grand Ole Opry: The Grand Ole Opry® is presented by Humana®.  Opry performances are held every Friday and Saturday of the year, with Tuesday night shows running through December, Wednesday night shows returning this spring, and seasonal Opry Country Classics shows on Thursdays. To plan an Opry visit, call (800) SEE-OPRY or visit opry.com. The Opry presents the best in country music live every week from Nashville, Tenn.  Celebrating nine decades of entertainment, the Opry can be heard at opry.com and wsmonline.com, Opry and WSM mobile apps, SiriusXM Satellite Radio, and its flagship home, 650 AM-WSM. The Grand Ole Opry is owned by Ryman Hospitality Properties (NYSE: RHP).  For more information, visit opry.com.

Marty Stuart Is 2019 Artist-in-Residence at Country Music Hall of Fame and ...