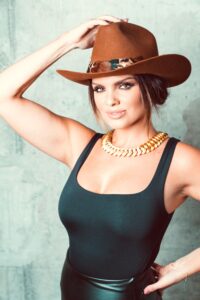 Rising Country artist Renee Blair makes her album debut with the release of Seventeen, available today, Friday, Nov. 5. After writing and recording the personal body of work over the last serveral years, Blair delivers Seventeen with the help of some of Nashville’s hottest writers and producers, to share her story with fans.

“I would describe this album as a peek under the hood of my life, there isn’t one song I haven’t lived. I share the good and the bad, my fears, mistakes and all the love I’ve experienced,” shares Blair. “I grew up in St. Louis, obsessed with Nelly and Shania Twain at the same time, so I hope people can hear my influences on both ends of the musical spectrum.”

Seventeen has significant meaning behind its title — Blair, who moved to Nashville at age 17 after being discovered by songwriting legends LA Reid, Diane Warren and Shane McAnally, aptly named the  project after major milestones throughout her career. The recently engaged singer fell in love with her husband-to-be and producer Jordan Schmidt in 2017, with seventeen always being her lucky number. Ensuring the “luck” of this album even further, the project is stacked with some of Nashville’s most renowned songwriters such as McAnally, Kane Brown, Matt McGinn, Jordan Schmidt, Walker Hayes and many more.

The 17 song collection, plus two bonus acoustic tracks, includes fan favorites like “Heart’s In Your Head,” “Turn Up the Night,” and “You Did.” Written and recorded over the last several years, the St. Louis native describes her debut album as “a glimpse of all the different experiences I’ve had; the heartbreaks, and falling in love, and all the in between.”

This month, Blair was tapped as Spotify’s Radar Country artist of the month. She’s earned previous spots on Spotify’s Hot Country and Apple Music’s Today’s Country and was inducted into CMT’s ‘Next Women of Country. Racking up over 20 million global artist streams, earning coveted opening slots with artists such as Chase Rice, Mitchell Tenpenny, Kane Brown, Carly Pearce and HARDY, and hosting a daily radio show on “YoCo” (Nashville’s only genreless radio station 96.7 FM), Blair is carving a path all her own.