MIRANDA LAMBERT COMES ROARING BACK TO COUNTRY RADIO WITH NEW SINGLE, “IT ALL COMES OUT IN THE WASH” 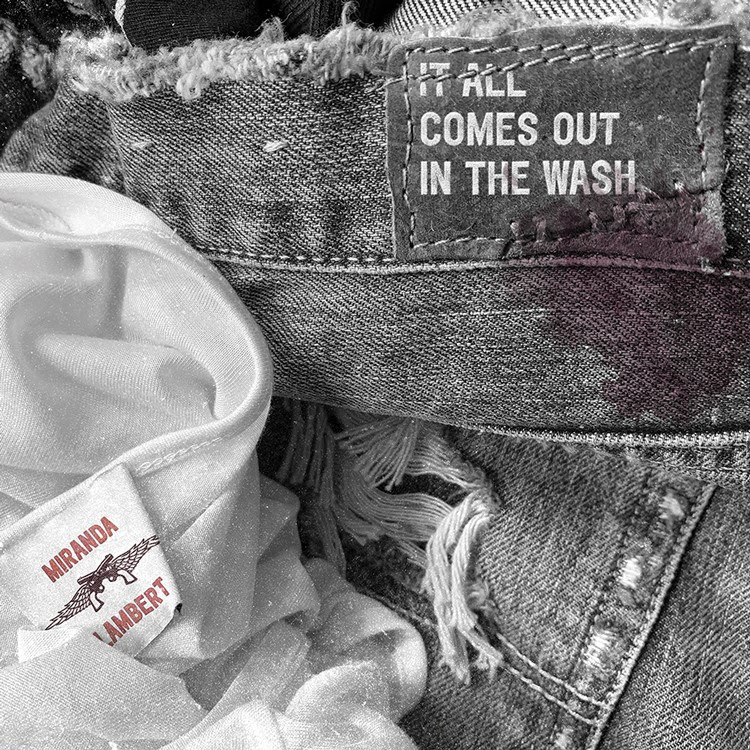 (July 18, 2019 – Nashville, TN) GRAMMY Award-winning superstar Miranda Lambert is thundering back to country radio with her brand new single “It All Comes Out in the Wash,” which premiered this morning across radio stations nationwide – Lambert’s first taste of new solo music in nearly three years.

“When we were little, our moms would say ‘let’s not worry about a stain.’ Everyone goes through times in life that are difficult and has moments that they wish would pass,” said Lambert, who co-wrote the track alongside The Love Junkies (Hillary Lindsey, Lori McKenna, Liz Rose). “This song is a mix of scenarios that we have all either been a part of or have seen, and is a fun reminder that hard times do eventually pass.”

Responding to deafening demand, Lambert surprised fans by also releasing “Locomotive,” which she describes as a “total country punk-rock” track written alongside Ashley Monroe and K.S. Rhodes. She debuted the “scorching” (Rolling Stone) song at CMA Fest in June.

“It All Comes Out in The Wash” and “Locomotive” are both available now on all streaming platforms and digital retailers.

Lambert will hit the road for the Roadside Bars & Pink Guitars Tour this fall, with special guests Maren Morris and Elle King, as well as Pistol Annies, Tenille Townes, Ashley McBryde and Caylee Hammack on various dates (details below). Tickets are on sale now.

About Miranda Lambert:
Vanner Records/RCA Records Nashville singer/songwriter Miranda Lambert is the nine-time ACM Female Vocalist of the Year. Her accolades include 2 GRAMMY Awards, 13 (CMA) Country Music Associations Awards and 32 (ACM) Academy of Country Music Awards as well as many other honors, including the prestigious Harmony Award from the Nashville Symphony and the ACM Gene Weed Milestone Award.

The Texas native is back with her first taste of new solo music since the release of her last record, a double album titled The Weight of These Wings in November 2016, which debuted at No. 1 on the Billboard Top Country Albums chart. She touts six studio albums to her repertoire; Kerosene (2005), Crazy Ex-Girlfriend (2007), Revolution (2009), Four The Record (2011) and Platinum (2014), the latter earning Lambert a GRAMMY Award for Best Country Album, in addition to her previous GRAMMY win for Best Female Country Vocal Performance in 2010 for “The House That Built Me.”  The first song released from The Weight Of These Wings, “Vice,” received multiple GRAMMY and ACM Award nominations. Lambert’s next single “Tin Man”, which she debuted at the 52nd Academy of Country Music Awards, won “Song of the Year” at the 53rd Academy of Country Music Awards (ACM).

Miranda toured extensively in 2018, starting with the Livin’ Like Hippies tour in January and then following it up with The Bandwagon summer tour with Little Big Town. She was also honored by the Country Music Hall of Fame as their “Artist In Residence” performing twice in September. As if that wasn’t enough, she wrapped the year with releasing another Pistol Annies album Interstate Gospel on November 2. She returns to the road this year on the Roadside Bars & Pink Guitars Tour 2019.