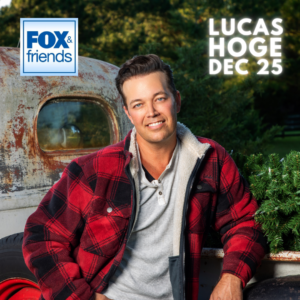 No. 1 Billboard charting artist Lucas Hoge will celebrate Christmas Day with a performance of “Christmas Without You” from his holiday album, 12.25, this Saturday, December 25 on “Fox & Friends.” Proceeds from “Christmas Without You” will benefit the Purple Heart Foundation, a non-profit organization that raises funds to help veterans and their families. Hoge is passionate about giving back to this organization during the holiday season and beyond.
12.25 is produced by GRAMMY®-nominated Kent Wells (Dolly Parton) and features collaborations with ACM/CMA/TONY-nominated Skip Ewing and platinum-selling singer-songwriter Jamie O’Neal. The album features re-imagined holiday classics as well as four original songs from Hoge.

“This is my favorite project to date, not only did I have the best time recording this with such a revered producer in the industry as Kent Wells. I got to have some good friends and amazing country artists be a part of this as well,” shared Hoge. “Being able to have one of my musical inspirations, Skip Ewing, duet a song with me and have Jamie O’Neal’s tremendous vocals on ‘Let it Snow’ was a dream. I hope everyone loves this record as much as I do, and becomes a staple for every Christmas season.”

ABOUT LUCAS HOGE:
With equal ease and finesse, No. 1 Billboard-charting artist Lucas Hoge can craft a song, cast a line or call in a turkey in front of a film crew, all while holding an audience’s attention on stage when performing. As a warm, engaging television host on his own weekly series “Hoge Wild,” Lucas takes viewers across the globe as he travels to New Zealand, Bolivia, Africa and unchartered territory in North America to amplify his passion for the outdoors and change the narrative around conservation. For more than two years, Lucas has been bringing his gospel “Sunday Sessions” to his fans every week, which eclipsed 25 million views in early 2020. Even during the height of online engagement worldwide during the COVID pandemic, Lucas still found a way to dominate the live streaming charts with weekly virtual concerts that consistently amassed chart-topping audience numbers, Hoge found himself alongside Luke Combs, Snoop Dogg, DMX, BTS in the Top Ten on Pollstar’s Weekly Livestream Chart. Lucas Hoge’s restless creative spirit, abundance of Midwestern charm and a work ethic that won’t let him slow down, it looks like the best is yet to come.