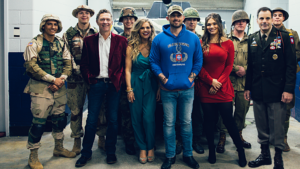 Join country artists as they take the stage alongside the 82nd Airborne Division Band & Chorus for an All-American Holiday Concert! Hosted by Natalie Stovall and produced by Orpheus Live, in collaboration with Nashville Music Consultants, the show features country stars Michael Ray, Craig Morgan, and Abby Anderson performing holiday favorites in tribute to the 82nd Airborne Division paratroopers, veterans, and their families.

“We are beyond thrilled that some of Nashville’s best artists, to include 82nd Airborne veteran, Craig Morgan, came to town to ring in the holidays,” says Fort Bragg Commanding General Christopher Donahue. “This was a very special evening and a perfect way for us to say thank you for everything our Paratroopers and families have done for the Division and the nation over the past year.”

“We are honored to answer the call of General Donahue and Fort Bragg to bring this fantastic event to the men and women of the 82nd Airborne Division and the surrounding community,” said Rebecca Abrahams, Executive Producer and President of Orpheus Live. “We are also excited to entertain and bring holiday cheer to active-duty soldiers throughout the season by distributing the concert via American Forces Network and to country music fans nationwide via Circle TV and RFD TV.”

Prior to the show, Michael Ray, Craig Morgan and Abby Anderson visited with the 82nd paratroopers and commanding officers at Fort Bragg to participate in various training activities and offer their personal thanks to the paratroopers for their service in Afghanistan.

“I’m very proud to have performed with the 82nd Airborne Division Band for our servicemen and women at Fort Bragg,” says artist Michael Ray. “The opportunity to show appreciation for those who serve our country is always an honor, and I’m grateful to have been a part of it.”

“The 82nd Airborne Division’s performance is spectacular under the musical direction of MAJ Rich Winkles,” says Clay Myers, President of Nashville Music Consultants.  “We were proud to be a part of the All-American Holiday concert and to have had the privilege to work alongside Lt. Col. Brett Lea and his team.”