VINCE GILL, EMMYLOU HARRIS, LUKE COMBS AND SHERYL CROW TO COME TOGETHER FOR ALL FOR THE HALL LOS ANGELES SEPT. 17

Country Music Hall of Fame members and friends to offer “guitar pull” performance to raise funds in support of the museum’s education programs. 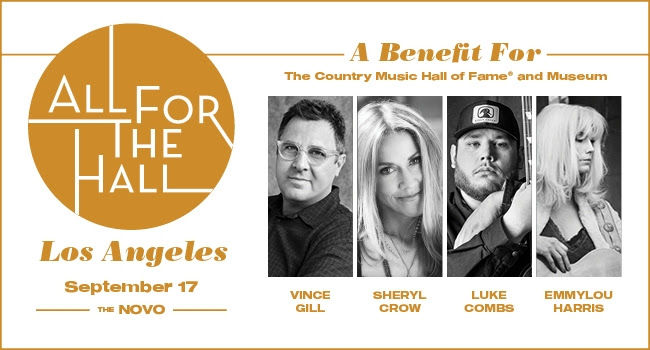 NASHVILLE, Tenn., and LOS ANGELES, July 15, 2019 – Country Music Hall of Fame members Vince Gill andEmmylou Harris, along with Luke Combs and Sheryl Crow, are set to take the stage at this year’s All for the Hallbenefit in Los Angeles. This star-studded event, which directly supports the Country Music Hall of Fame® and Museum’s education programs, will take place Tuesday, Sept. 17, 2019, at The Novo in the L.A. Live complex.

Gill has hosted or co-hosted every All for the Hall concert since he founded the campaign in 2005. Now in his 18th term as president of the Country Music Hall of Fame and Museum’s Board of Officers and Trustees, Gill launched the All for the Hall initiative by encouraging country artists to contribute the proceeds from a performance to benefit the museum. A gifted songwriter and guitarist with a warm, soaring tenor and quick wit, Gill has been an engaging and amiable host and first-class recruiter of talent for All for the Hall. Gill, who was inducted into the Country Music Hall of Fame in 2007, is a member of the Grand Ole Opry and has won 21 Grammys and 18 CMA awards. His four Song of the Year trophies make him the most-awarded artist in that category in CMA history.

Hailed as “a national treasure” by Bruce Springsteen, Harris has captivated music fans and industry peers for more than 40 years. She released her first major-label album in 1975, and in the years since, her heartfelt, boundary-breaking artistry has attracted millions of listeners to country music. The winner of 13 Grammys, three CMA awards and two Americana awards, Harris was inducted into the Country Music Hall of Fame in 2008 and presented with a Lifetime Achievement Award from the Recording Academy in 2018.

Combs is a multi-platinum, award-winning artist from Asheville, North Carolina, who stormed onto the music scene with the release of his critically acclaimed, double-platinum, #1 debut album, This One’s For You, in 2017. Combs recently released his EP, The Prequel, featuring five new songs, including the lead single “Beer Never Broke My Heart,” which set the record for the best first week of streaming for a country singer. Combs was named New Artist of the Year at the 2018 CMA Awards and New Male Artist of the Year at the 2019 ACM Awards.

Crow is a Grammy-winning singer, songwriter and musician whose career has spanned more than 25 years. Her hits include “All I Wanna Do,” “Soak Up the Sun” and “The First Cut Is the Deepest.” Her nine studio albums embrace country, rock and pop influences and have sold 35 million copies worldwide.

The All for the Hall concerts are modeled after a Nashville tradition known as a “guitar pull,” a casual affair in which songwriters take turns performing while their fellow artists listen or add accompaniment. The one-of-a-kind evening unfolds with no setlist, and Gill, Harris, Combs and Crow will decide what to sing in the spur of the moment while swapping stories, jokes and music.

Tickets for this year’s All for the Hall Los Angeles benefit concert go on sale this Friday, July 19, 2019, at 10 a.m. Pacific/12 p.m. Central, and can be purchased via www.TheNovoDTLA.com.

About All for the Hall

The All for the Hall series launched in 2005 and began traveling to Los Angeles in 2009. The 2019 event is produced by museum board members Rod Essig, Ken Levitan, Gary Overton and Jody Williams, with Gill and his longtime manager Larry Fitzgerald. The series has alternated between Los Angeles and New York, with Gill and Harris serving as hosts in an acoustic format. With Keith Urban, Gill also co-hosts an All for the Hall concert in Nashville at Bridgestone Arena. To date, All for the Hall concerts have netted more than $4.3 million in support of the museum’s educational initiatives, which directly serve more than 100,000 people annually.