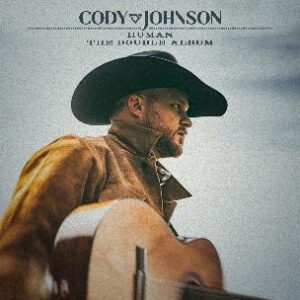 Human The Double Album, the sophomore major-label release from COJO Music/Warner Music Nashville Platinum recording artist Cody Johnson, will be available October 8th to stream and purchase on all digital music platforms (PRE-ORDER HERE). Beginning today, fans can also pre-order a physical copy of the album by visiting Johnson’s website at codyjohnsonmusic.com. The massive endeavor is stacked top to bottom with songs that were originally rejected by other Nashville artists, for what Johnson considers as being too country for country. “It’s so hard to watch the fight to get the cowboy back on the radio, so I told them to bring those songs to me,” Johnson explains. “Because that’s who I am and the lifestyle I live.”
Johnson continued: “There was too much good out there to let go of, so I just said, ‘We’re going to cut all of them.’ There are ones I wrote on, there are ones I didn’t write on, and there are ones that I wish I’d written. I addressed things personally with this music and when people listen to Human, they are going to hear a lot more of me being me. I am finally comfortable with myself and able to share that with my fans.”
To celebrate the announce, Johnson has also released the brand-new tracks “Treasure” and “Son of a Ramblin’ Man,” which are both featured on the 18-track project (LISTEN HERE). Backed by harmonies and a beautiful fiddle feature, Johnson brings to life songwriter Matt Rogers’ lyrics in “Treasure,” which tells a story about how beauty really is in the eye of the beholder. He then puts his Texas spin on “Son of a Ramblin’ Man,” written and originally recorded by legendary singer, songwriter and multi-instrumentalist Vince Gill.
In addition, Johnson’s feature-length documentary, Dear Rodeo: The Cody Johnson Story, can now be rented or purchased exclusively via the Apple TV app through October 8 in the US and Canada (CLICK HERE). The Texas native also sat down with Today’s Country Radio host Kelleigh Bannen to break down what it means to be a cowboy and how his forthcoming album is an invitation for listeners to accept the highs and lows of their own lives. Fans can tune in and listen today (9/3) at 5amPT/7amCT/8amET or anytime on-demand at apple.co/_TodaysCountry.
Dear Rodeo: The Cody Johnson Story was first released to select cinemas nationwide for a limited time, with multiple showings added due to popular demand, for a total of 239 theaters featuring the movie across the country. Alongside guest appearances by Reba McEntire, Navy Seal Chris Kyle’s widow Taya (Kyle), and more, Johnson opens up about how his years on the rodeo circuit fortuitously prepared him for his life as a country star. From standing in the back of the chute at the rodeo or singing about it in front of 75,000 fans, fans will learn more about his real-life journey from the dusty rodeo arenas of rural Texas to some of the biggest musical stages in America. The film vividly captures all the emotional highs and lows that come from the dreams you cling to and the dreams you ultimately let go of.
ABOUT CODY JOHNSON:
Known for his explosive live shows and electrifying stage presence, COJO Music / Warner Music Nashville Platinum recording artist Cody Johnson has established a following of passionately loyal fans who regularly sell out shows across the country and have helped him accumulate more than two billion streams worldwide. The recipient of multiple ACM and CMA Awards nominations, his RIAA certifications include two Gold-selling songs (“Nothin’ On You” and “With You I Am”) and the Platinum-selling, Top 10 single, “On My Way To You.” Named one of NSAI’s 10 Songs I’d Wish I’d Written 2020 and ASCAP’s Most Performed Songs of 2019, “On My Way To You” was featured on his first major-label release, Ain’t Nothin’ to It, which skyrocketed to No. 1 on Billboard’s Top Country Albums and all-genre Digital Sales charts. The LP reached Top 10 on the all-genre Billboard 200 chart and made history as the third-highest pre-added album of all time in the country music genre on Apple Music at the time of release.
https://nashvilleinsider.tv/wp-content/uploads/2021/09/CodyJohnson_1.jpg 897 897 Michael Glynn https://nashvilleinsider.tv/wp-content/uploads/2018/04/logo-yes.png Michael Glynn2021-09-06 21:05:382021-09-06 21:19:09CODY JOHNSON ANNOUNCES HUMAN THE DOUBLE ALBUM
0 replies