CONCERT IS FREE TO FANS IN PERSON AND VIA LIVESTREAM 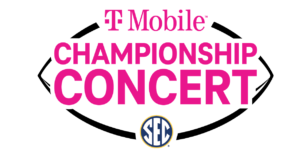 Multi-Platinum global entertainer Chris Young will headline the first-ever T-Mobile SEC Championship Concert on Dec. 3, the eve of the SEC Championship game. Young, whose massive hits include “Famous Friends,” “I’m Comin’ Over,” “Tomorrow” and “Gettin’ You Home,” will take the stage with support from special guests and fellow Sony Music Nashville artists Mitchell Tenpenny and Kameron Marlowe at Georgia International Plaza outside Mercedes-Benz Stadium in Atlanta. The event kicks off at 5:30 p.m. EST with performances from Marlowe and Tenpenny, followed by Young taking the stage at 7:00 p.m. EST.

“Anyone who knows me, knows I pretty much live and breathe football,” says Young.  “I am beyond pumped to team up with T-Mobile and the SEC to headline the concert before the SEC Championship game! Let’s GO!!”

This epic fan experience featuring three Sony Music Nashville stars is free and open to the public with no ticket required. Fans on the ground can catch unique photo opportunities, food and beverages available for purchase and more. For fans who cannot attend in-person, T-Mobile will host a worldwide livestream broadcast of Chris Young’s performance beginning at 7:00 p.m. EST via Young’s YouTube and Facebook channels, watch HERE.

T-Mobile, Sprint and Metro by T-Mobile customers and their guests can snag exclusive stage-front access, complimentary charging and more in the T-Mobile Magenta Zone. Customers can also score limited edition Chris Young swag and a complimentary beverage … just for being a customer. Capacity in the T-Mobile Magenta Zone is limited, so customers are encouraged to arrive early. All they have to do is show their phone for entry.

This special performance from Chris Young will highlight music from his recently released album, Famous Friends. The record includes the multi-week No. 1 title track with Kane Brown and new single, “At The End Of A Bar” with Mitchell Tenpenny. Fans can also catch Young on his weekly podcast, “The Quad with Chris Young” as he and friends Josh, Hailey and Ryan discuss four topics: Sports, Movies, Music and a weekly Hot Take. Listen HERE.

Last month Tenpenny released his 11-song Christmas album Naughty List. The project arrives on the heels of his new EP, Midtown Diaries, which contains his current radio single “Truth About You.” The song became the largest streaming debut of his career, garnering 2.5 million streams in its first three days of release. Fans can hear Tenpenny perform the new music on his current headlining TO US IT DID TOUR.

Marlowe recently released “Steady Heart,” one that the rising star calls his favorite to date. His currently single “Giving You Up” is currently spinning at country radio and has earned more than 115 million on-demand streams. He is currently on the road with Riley Green after earning rave reviews for his opening stint on Brad Paisley’s Tour 2021.