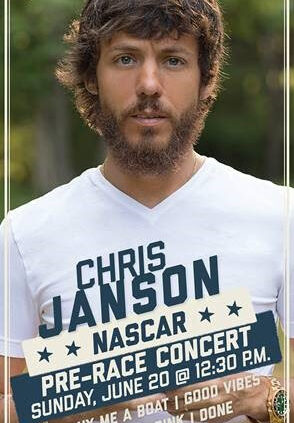 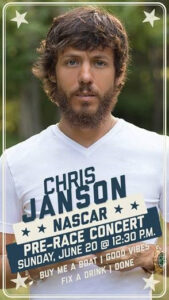 Warner Music Nashville’s Chris Janson, a Grand Ole Opry member and platinum-selling recording artist, will perform a pre-race concert on track at Nashville Superspeedway prior to the “Ally 400” NASCAR Cup Series race on Sunday, June 20, track officials announced today.
Janson will display his high-octane, multi-instrumental talents while performing his No. 1 hits on a stage near the start-finish line between the morning Cup Series qualifying session (10:05 a.m.) and the afternoon “Ally 400” (2:30 p.m., NBCSN), the first Cup Series race in Middle Tennessee in 37 years. Grandstand gates open at 9 a.m. on Father’s Day.
“I’m super thrilled to be performing at the NASCAR Cup Series pre-race concert at Nashville Superspeedway on June 20th,” says Janson. “I’m pumped to have NASCAR back in Nashville for the first time in 10 years with a SOLD-OUT crowd. I can’t think of a better combination than racing fans & country music fans. It will be a glorious day!”
“As Middle Tennessee’s home track for NASCAR Cup Series racing, we understand the importance of infusing the heart of Music City into our events,” said Erik Moses, Nashville Superspeedway’s president. “We’re thrilled that Chris Janson will bring his special brand of entertainment to our Father’s Day race weekend and are certain our fans from across the state and around the country will enjoy his show before America’s best drivers take the green flag for the Ally 400.”
Tickets are available for Nashville Superspeedway’s first two races on its Father’s Day weekend slate, including the “Tennessee Lottery 250” NASCAR Xfinity Series race on Saturday, June 19 (2:30 p.m. CT, NBCSN) and the “Rackley Roofing 200” NASCAR Camping World Truck Series race under the lights on Friday, June 18 (7 p.m. CT, FS1).
Fans can order tickets for the June 18-19 events by visiting NashvilleSuperSpeedway.com or calling 866-RACE-TIX.
About Chris Janson:
Chris Janson is an ACM award-winner, a member of the Grand Ole Opry and is a “live legacy in the making” (Rolling Stone). The breakout country star is a high-octane entertainer, multi-instrumentalist, and award-winning singer/songwriter who has had 4 No. 1 hit singles. In the five years since the release of his debut album, the three-time CMA nominee has collected prestigious accolades that place him among country music greats. He took home the trophy for ACM Video of the Year for his Gold-certified, inspiring hit song “Drunk Girl,” which also earned the Song of the Year title at the 2018 Music Row Awards and was named one of the “Ten Songs I Wish I’d Written” by NSAI. His chart-topping, triple-Platinum smash “Buy Me A Boat” earned the same NSAI honor, making him one in a handful of the industry’s most elite artists to earn the title multiple times, as well as the iHeartRadio Music Awards Country Song of the Year. Janson’s No. 1 hits including multi-week chart topper “Done,” “Good Vibes,” “Fix a Drink,” “Buy Me A Boat,” and the award-winning “Drunk Girl.” His current single, “Waitin’ On 5,” can be heard now on the airwaves. In addition to his own successes, the talented songwriter has lent his pen to industry peers including Tim McGraw (“Truck Yeah,” “How I’ll Always Be”), LOCASH (“I Love This Life”) and the legendary Hank Williams Jr. (“God Fearin’ Man,” “Those Days Are Gone”) & many more. For more information, visit www.chrisjanson.com
About Dover Motorsports, Inc.
Dover Motorsports, Inc. (NYSE: DVD) is a promoter of NASCAR sanctioned motorsports events whose subsidiaries own and operate Dover International Speedway in Dover, Del., and Nashville Superspeedway in Lebanon, Tenn. The company also plays host to the Firefly Music Festival, produced by AEG Presents. For more information, visit www.DoverMotorsports.com.
https://nashvilleinsider.tv/wp-content/uploads/2021/06/ChrisJanson_Nascar.jpg 522 294 Michael Glynn https://nashvilleinsider.tv/wp-content/uploads/2018/04/logo-yes.png Michael Glynn2021-06-03 21:46:582021-06-03 22:03:43CHRIS JANSON TO PERFORM PRE-RACE CONCERT AT NASCAR CUP SERIES RACE AT NASHVILLE SUPERSPEEDWAY JUNE 20TH
0 replies