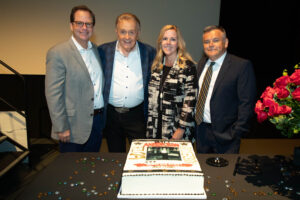 The Grand Ole Opry® presented by Humana® honored Country Music Hall of Famer Bill Anderson on his 60th anniversary as an Opry member Saturday evening. Anderson made his Opry debut just a few weeks before his 21st birthday and became an official Opry member less than three years later on July 15, 1961 at 23-years-old, the youngest member at the time. Sara Evans and Opry members Mark Wills and Vince Gill joined other artists on stage congratulating Anderson on his milestone 60th Anniversary. The performances aired as part of Opry Live on the Circle Network.

In celebration of the Grammy-nominated and ACM Poet Award honoree, Tennessee Governor Bill Lee issued an official proclamation that July 17 is “Bill Anderson Day.” Nashville Mayor John Cooper also proclaimed July 17 as “Bill Anderson Day” in Music City. Backstage after the Opry performance, the country legend celebrated with friends, family members, and fellow artists in the Opry House’s backstage Studio A. Longtime friend and Opry member Vince Gill presented the State of Tennessee proclamation to Anderson on behalf of Governor Lee, while 54-year Opry member Jeannie Seely was on hand to present Anderson with a framed proclamation from the City of Nashville on behalf of Mayor Cooper.

“First of all, it’s really hard to imagine I’ve been at the Grand Ole Opry for 60 years,” shared Anderson. “It seems like yesterday they asked me if I wanted to be a part of this great family, and of course I couldn’t wait to tell them yes and be a part of this wonderful family. Because that’s what it is, a wonderful, wonderful family. I feel so blessed to have been a part of it for 60 years. I tell people all the time that the Grand Ole Opry is like Yankee Stadium to a baseball player, or Broadway to an actor, or Hollywood to someone in film. It’s the highest rung on the ladder. It’s as high as you can go in country music and I’m just thankful that I’ve gotten to be here for 60 years.”

Anderson’s music career started in 1958 when Ray Price recorded his song, “City Lights” and it stayed at the top of Billboard magazine’s country charts for 13 weeks. Soon after this success, he signed with Decca Records and began to have hits of his own such as “Po’ Folks,” “Mama Sang a Song,” “Still” and “Bright Lights and Country Music.” By now he had affectionately been nicknamed “Whisperin’ Bill” because of his soft-spoken delivery and recitations. Through the years Anderson has written hit songs for numerous artists, including Lefty Frizzell’s “Saginaw, Michigan,” Conway Twitty’s “I May Never Get to Heaven” and many more including Kenny Chesney’s “A Lot of Things Different,” George Strait’s “Give It Away” and Brad Paisley and Alison Krauss’ “Whiskey Lullaby,” with the last two hits winning CMA Song of the Year honors.

On October 30, 2021, the Opry, the world’s longest-running radio show, will mark a historic, record-breaking milestone with its 5,000th Saturday night broadcast.

ABOUT BILL ANDERSON:
Country Music Hall of Famer and Grand Ole Opry titan Bill Anderson is the rare songwriter whose first major label cut went to No. 1 on the charts, was named Song of The Year and sparked a writing career that is currently in its seventh decade. The song, “City Lights,” was written when Anderson was a 19-year old Georgia disc jockey and became a career-defining hit for Ray Price in 1958.  The song opened doors for him in Nashville, leading him to signing with BMI and Tree Publishing. Anderson was far from a one-hit wonder. He followed “City Lights” with country standards like “Tips Of My Fingers,” the GRAMMY-nominated “Once A Day,” “Saginaw, Michigan,” “That’s What It’s Like To Be Lonesome,” “I Missed Me,” “Cold Hard Facts Of Life,” which earned him another GRAMMY nomination, “Mama Sang A Song,” the crossover smash, “Still,” and countless others. He was voted country Songwriter of the Year six times during his first decade in Music City. His success continued into the 1970’s with award-winning hits like “Slippin’ Away,” “The Lord Knows I’m Drinking,” “I May Never Get To Heaven,” and the disco-flavored, “I Can’t Wait Any Longer.” The 1980’s saw Anderson’s chart-topping career take a hiatus as he became a TV network game show host, spokesman for a national restaurant chain and a nonstop touring Grand Ole Opry performer. In the 1990’s he came roaring back with a vengeance, however, as he seriously turned to co-writing for the first time. Inducted into the Country Music Hall of Fame in 2001, his collaborations with the newer generation of Nashville tunesmiths resulted in hits like “Wish You Were Here,” the GRAMMY-nominated “Two Teardrops,” “A Lot Of Things Different,” for Kenny Chesney, “Which Bridge To Cross (Which Bridge To Burn),” for Vince Gill and two CMA Song Of The Year trophies for “Whiskey Lullaby,” with Brad Paisley and Alison Krauss and George Strait’s “Give It Away,” in 2005 and 2007 respectfully.  He continues to write today with songs like Brad Paisley’s “Dying To See Her.” For more information, visit BillAnderson.com.

ABOUT THE GRAND OLE OPRY:
The Grand Ole Opry® is presented by Humana®. Opry performances are held every Friday and Saturday of the year, with Tuesday Night Opry shows running February 16 – December 13. To plan an Opry visit, call (800) SEE-OPRY or visit opry.com. The Opry presents the best in country music live every week from Nashville, Tenn. Celebrating nine decades of entertainment, the Opry can be heard at opry.com and wsmonline.com, Opry and WSM mobile apps, SiriusXM Satellite Radio, and its flagship home, 650 AM-WSM. The Grand Ole Opry is owned by Ryman Hospitality Properties (NYSE: RHP).  For more information, visit opry.com.

SCOTTY McCREERY READIES FANS FOR NEW ALBUM WITH NEW SONG “WHY YOU GOTTA BE...
Scroll to top