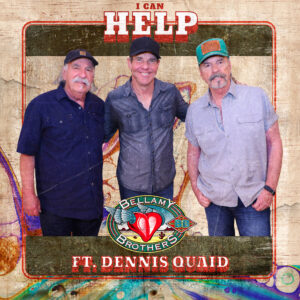 Iconic international duo the Bellamy Brothers invited global superstar Dennis Quaid in the studio to record a rousing rendition of Billy Swan’s smash-hit “I Can Help.” The track is the lead single off the Bellamys’ forthcoming album, Covers From The Brothers, slated for release this fall. To stream or download “I Can Help,” click HERE.

People exclusively debuted the video for “I Can Help,” described by Quaid as “the kind of moment dreams are made of.” Filmed at a recording studio outside Nashville by Derrek Kupish of dkupish productions, the video showcases the camaraderie shared between the three entertainers. Quaid, who worked on the film “Great Balls of Fire!” with Swan, even received the Rockabilly Hall of Famer’s blessing before the session.

“It couldn’t have been more fun recording ‘I Can Help’ with David and Howard Bellamy. I felt like I was a kid skipping school and jamming with a band,” shared Quaid.

Taste of Country exclusively premiered the audio for the collaboration noting, “The trio trade lead vocals and harmonies throughout the rollicking track, which retains much of the original flavor of Swan’s recording from 1974 (Sterling Whitaker).” Produced by David and Howard Bellamy, the session will be featured in an upcoming episode of the Bellamys’ hit reality series “Honky Tonk Ranch,” which airs on the Grand Ole Opry’s Circle Network. Quaid will also join the Bellamy Brothers at the Opry this Saturday, July 10 to celebrate the release.

After recording over 50 original albums, Covers From The Brothers will mark the Bellamy Brothers’ first, covers-only album. Fans can look forward to hearing the duo cover artists ranging from Charlie Rich to Stevie Wonder. The Bellamy Brothers are also back on the road performing to fans across the country and gearing up for their 2022 European tour. Full list of dates below. For tickets and more information, click HERE.

When the stay-at-home orders took effect in March of 2020, the Bellamy Brothers were on Blake Shelton’s Friends And Heroes Tour. They returned to their Florida homestead where “Honky Tonk Ranch” is filmed and stayed busy through a partnership with the Florida-based medical marijuana company Trulieve as well as the release of their Bucket List EP. “I Can Help” follows the release of their “No Country Music For Old Men” collaboration with John Anderson, which has amassed nearly 2.5 million views and received praise from Rolling Stone Country, The Boot and Country Rebel.