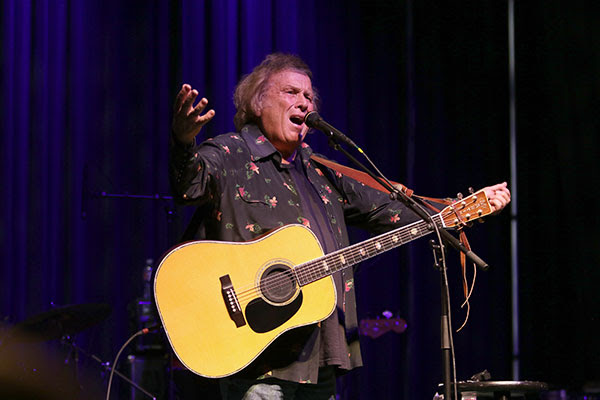 Plus, McLean continues to tour throughout the U.S. & internationally with performances in Florida, Georgia, Texas, California, New York, Holland & United Kingdom thru September

NASHVILLE, Tenn. – America’s legendary singer and songwriter, Don McLean, will be featured on SiriusXM’s Elvis Radio (Channel 19) this Saturday, July 20 at 12 noon ET/11am CT. McLean chats with life-long Memphian, and morning host of Elvis Radio, DJ Argo. The hour long interview special traces McLean’s connection to the King of Rock & Roll, including Presley’s performance of McLean’s classic hit song “And I Love You So.” McLean recently performed at Graceland in June of this year on Father’s Day weekend.

McLean continues his coast-to-coast tour throughout the United States in 2019, performing his classic hit song catalog to packed theaters and concert halls everywhere. McLean kicks off a six show set of European dates August 26 in Amsterdam, Holland, and then throughout the United Kingdom with a headlining performance on September 1 at the Moseley Folk & Arts Festival in Birmingham.

“I’m really happy about going back overseas to some of my favorite cities,” said McLean. “I haven’t came over in the summer months much, so this will be a real treat. I am looking forward to seeing my fans and all the wonderful sights in the U.K. & Holland.”

About Don McLean:
A New York native, Don McLean is one of the most revered and respected songwriters in American history. After paying his dues in the New York club scene in the late ‘60s, he went on to score mega-hits like “American Pie,” “Vincent (Starry, Starry Night),” “Castles in the Air” and many more. In 2004, McLean was inducted into the Songwriters Hall of Fame by country superstar Garth Brooks. In 2000, “American Pie” was named one of the Top 5 Songs of the 20th Century by the RIAA and in 2002 was inducted into the GRAMMY Hall of Fame. In 2015, one of McLean’s four handwritten manuscripts of the lyrics to “American Pie” was auctioned by Christies, selling for just over $1.2 Million. 2017 brought a huge honor when his iconic song was inducted into the Library of Congress’ National Recording Registry, joining less than 500 works including “Somewhere Over the Rainbow.” With over 40 gold and platinum records worldwide, McLean’s prowess for writing timeless songs was again captured on his 2018 album, Botanical Gardens, as he artfully weaves country, Americana, folk, and boot stomping rock for an eclectic, yet American sound that he is known for.