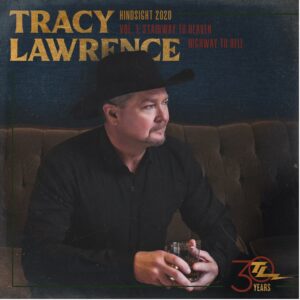 (April 23, 2021 – Nashville, TN) Country music legend, Tracy Lawrence, is celebrating his 30th anniversary of making timeless Country music this year. His traditionalist approach has been captivating audiences for the past three decades and to celebrate this momentous career milestone, Lawrence is releasing a special project, Hindsight 2020, a three-volume album that will be released throughout the year, celebrating 30 songs for 30 years of Tracy Lawrence. Volume 1: Stairway to Heaven Highway to Hell is available today wherever you find great music!

“It has truly been the honor of a lifetime to be so welcomed by Country music fans,” says Lawrence. “As I look back over the past 30 years, I am incredibly humbled to have been able to live my dream and to have so many folks support me along the way. I wanted to celebrate this amazing milestone with fond reflection and embrace the next chapter with the people who made it all happen, my fans.”

Volume 1: Stairway to Heaven Highway to Hell is Lawrence’s first release from Hindsight 2020. This 10-song collection features all new material from Lawrence, who penned 9 of the 10 tracks, mixing his signature blend of contemporary and traditional Country music that has made him a mainstay since his debut album, Sticks & Stones, in 1991.

On April 27th, Tracy will be celebrating his milestone 30th career anniversary with a livestream concert from The Warehouse in partnership with web-based performance platform, StageIt, and co-promoted through leading Country music and news resource, Taste of Country. Tracy and his band will be performing some of his biggest career hits along with new music from his latest album, Volume 1: Stairway to Heaven Highway to Hell.

Tracy Lawrence is one of country music’s truest traditionalists and this year he is celebrating his 30th anniversary in the Country music industry. His impressive catalog of timeless music has made Lawrence a mainstay in the genre selling more than THIRTEEN MILLION albums and charting EIGHTEEN No. 1 songs. He has garnered numerous CMA and ACM awards and nominations, as well as a Grammy nomination. Commemorating his three-decade career in 2021, Lawrence is releasing Hindsight 2020 – a three album collection which will be released in Volumes and includes all new music along with some of his favorite career hits.

In addition to his chart-topping success, Lawrence hosts the Award-Nominated nationally syndicated radio show “Honky Tonkin’ With Tracy Lawrence,” for which he has received two ACM nominations for National On-Air Personality of the Year. The show features music from the 80’s, 90’s and 2000’s and is heard on more than 115 affiliates. Tracy is also the co-creator of STORMING HEAVEN: THE MUSICAL, a production based on the novel Storming Heaven. Tracy, along with others, helped to develop the storyline of the musical and also composed songs for the drama. He was honored by the Nashville chapter of AFP (Association of Fundraising Professionals) with “Philanthropist of The Year” for his nationally recognized annual MISSION:POSSIBLE Turkey Fry and Concert, which has raised over Half a Million Dollars for the homeless and hungry in Dallas, Louisville and Nashville, and served more than 84,000 meals. MISSION:POSSIBLE is poised to make an even larger impact in the future, as the 501 (C) (3) organization expands into more markets across the country.