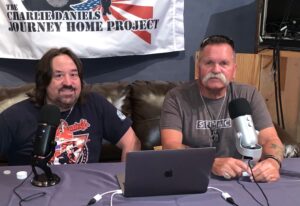 “We are honored that TCDJHP has agreed to sponsor our podcast,” says Daniels, Jr. “We look forward to working together to bring more awareness to this worthwhile organization which dad was extremely passionate about.”

The sponsorship officially begins this Friday, Sept. 3 when TCDJHP co-founder David Corlew joins the show for a special in-depth interview about his nearly five decade role as Daniels’ manager. Corlew will also speak of Daniels’ dedicated mission to assist our nation’s military vets, many of who struggle mentally and physically upon returning home from the battlefield. Calling attention to veteran suicides, of which 22 occur each day, was one of Daniels’ most passionate pleas. His message continues today through the work of TCDJHP.

“We feel like this a unique way to share the mission of TCDJHP, which is to support the return, rehabilitation and reintegration of our veterans into society,” explains Corlew. “What better way to support Charlie’s continued legacy than through Charlie Jr.’s podcast?”

“The Charlie Daniels Podcast,” features previously recorded interviews with the senior Daniels, as well as special guests who knew the late Grand Ole Opry member best. Upcoming guests will include producers, band and road crew members, office staff, and of course, the artists who were influenced by his music.

The show is available to download wherever podcasts are available. New episodes drop every other Friday at 8 a.m. / CT. For more information and links to the show, visit charliedaniels.com/podcast.

From his Dove Award-winning gospel albums to his genre-defining southern rock anthems and his CMA Award-winning country hits, few artists have left a more indelible mark on America’s musical landscape than the late Charlie Daniels. An outspoken patriot, beloved mentor, and a true road warrior, Daniels parlayed his passion for music into a multi-platinum career and a platform to support the military, underprivileged children, and others in need. The Charlie Daniels Band has long populated radio with memorable hits and his signature song, “The Devil Went Down to Georgia.” Over the course of his career, Daniels received numerous accolades, including his induction into the Country Music Hall of Fame, the Musicians Hall of Fame and becoming a member of the Grand Ole Opry. Daniels helped to shine the spotlight on the many causes that were close to his heart. He was a staunch supporter of the military and gave his time and talent to numerous charitable organizations, including The Charlie Daniels Journey Home Project, that he founded in 2014 with his manager, David Corlew, to help veterans of the United States Armed Forces. Daniels passed away on July 6, 2020. He was 83.
For more information, visit charliedaniels.com.

About The Charlie Daniels Journey Home Project
The Charlie Daniels Journey Home Project (TCDJHP) is a not-for profit organization that assists other not-for-profits in securing funds to help causes that benefit veterans of the United States Armed Forces. The organization was co-founded in 2014 by the late country music legend Charlie Daniels and his manager, David Corlew. Board members include Corlew, Major General Terry “Max” Haston (retired) and most recently in 2020, Hazel Daniels. Conscious of the need to assist our nation’s veterans, TCDJHP partners with organizations that do the most good, with the least overhead. Working in tandem with these organizations, TCDJHP is making a difference in the lives of American patriots. TCDJHP’s daily operations rely solely on public donations.To donate or for more information, visit thecharliedanielsjourneyhomeproject.org.
https://nashvilleinsider.tv/wp-content/uploads/2020/07/CharlieDaniels-scaled.jpg 1703 2560 Michael Glynn https://nashvilleinsider.tv/wp-content/uploads/2018/04/logo-yes.png Michael Glynn2021-09-06 20:38:442021-09-06 20:41:21THE CHARLIE DANIELS JOURNEY HOME PROJECT TO SPONSOR "THE CHARLIE DANIELS PODCAST"
0 replies

ASHLEY McBRYDE KICKS OFF FIRST-OF-THREE SOLD OUT HEADLINING SHOWS AT THE RYMAN...