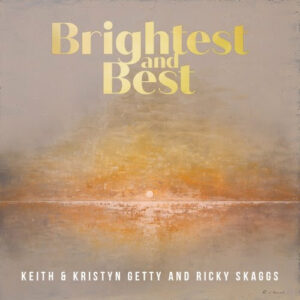 Prolific modern hymn writers Keith and Kristyn Getty have teamed with the iconic Ricky Skaggs to release a duet of the Christmas hymn “Brightest and Best,” available today. Skaggs lends his musical mastery to the classic, blending seamlessly with Keith and Kristyn.

Skaggs performed the song for the first time with the Gettys as a special guest on their annual Sing! An Irish Christmas Tour at the Kennedy Center. Immediately falling in love with Skaggs’ haunting rendition of the song, The Gettys were eager to record it with him.

Keith Getty says, “We were so thrilled to have Ricky at the Kennedy Center for the spine tingling moment of performing ‘Brightest and Best,’ and are even more honored to have recorded it as a single with him.”

Skaggs says, “I really love this song, ‘Brightest and Best.’ It says so much about the Lord JESUS coming to us as a baby and how the world changed from that day forward. Getting to sing it with Kristyn Getty was a real joy for me. She’s one of my favorite singers.”

To celebrate the release of “Brightest and Best” the Gettys and Skaggs will be performing at the Grand Ole Opry tonight as well (12/3).

The Gettys will be embarking on their annual Sing! An Irish Christmas tour starting December 10th in St. Louis with a special appearance from Skaggs, additional stops will include New York City’s Carnegie Hall, Nashville’s historic Schermerhorn Symphony Center and many more. Previously featured to millions of households internationally on public television, the BBC, and the Trinity Broadcasting Network, this year’s Christmas tour will feature seven brand new songs from Keith and Kristyn Getty, along with many of the traditional Christmas carols fans have come to know and love. Their Christmas special will also be broadcast on TBN and the BBC this year.

They also recently released their newest album, “Confessio – Irish American Roots,” 13 songs inspired by their history in Ireland, filled with traditional Irish-melodies and instrumentation, brand-new songs as well as timeless hymns arranged with the signature sound that is only the Gettys. The album features the lead track, “Pass The Promise” a new-anthem that is instantly singable, guest artists including Alison Krauss (“In Christ Alone”), Sandra McCracken (“All My Heart Rejoices,” “Pass the Promise”), Kirk Whalum and Dana Masters (“Amazing Grace”), as well as classic well-known hymns that are all the soundtrack of the green hills of Ireland.