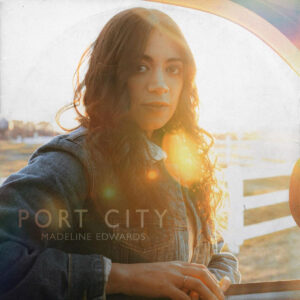 Singer/songwriter Madeline Edwards today released her new single, “Port City,” from her upcoming debut project expected out later this year. Written by Edwards, Court Clement, and Josh Moore, the song shares the journey of faith that it takes to pursue your dreams, or take chances. Listen to “Port City” HERE.
“I wanted to write a song about my move from Texas to Nashville and the leap that me and my husband took to go on this venture of pursuing music and me really following my dreams,” said Edwards. “I think everyone has one of those moments, whether it’s moving out of the house for the first time, getting married, having a baby, going off to college; so I wanted a song that incorporated everyone’s first experiences of taking a leap and having the faith to complete that journey.”
Recently announced as an opening act on Chris Stapleton’s upcoming All American Road Show Tour, Edwards has been noted for her ability to transcend musical boundaries by incorporating her jazz, soul, gospel and country influences into her unique sound “through vulnerability and passion” (NPR). She also continues to reign in accolades- including her 2022 CMT Woman of Country honor and her inclusion as a 2022 Spotify Hot Country Artist To Watch. Edwards first made her national television debut in 2021 at the CMA Awards, joining Mickey Guyton and Brittney Spencer for a performance that was consistently ranked as one of the best moments of the night.
Currently living in Nashville working on her debut EP, the California born, Texas raised singer/songwriter has already caught the attention of the industry, with notable performances and features including a performance on Lady Gaga’s Born This Way Tribute Record with The Highwomen, NPR’s Tiny Desk Concert, and opening slots for Jordin Sparks and Grammy award winner Raphael Saadiq. Named a Top 20 Breaker artist on NPR, she first made her national radio debut on Sirius XM and her latest single, “The Road” has garnered millions of streams and counting.
https://nashvilleinsider.tv/wp-content/uploads/2022/03/MadelineEdwards.jpg 1200 1200 Michael Glynn https://nashvilleinsider.tv/wp-content/uploads/2018/04/logo-yes.png Michael Glynn2022-03-24 21:04:102022-03-24 21:11:18MADELINE EDWARDS RELEASES NEW SINGLE “PORT CITY”
HELLO SUNSHINE PARTNERS WITH JAMES PATTERSON AND DOLLY PARTON TO PRODUCE THEIR...