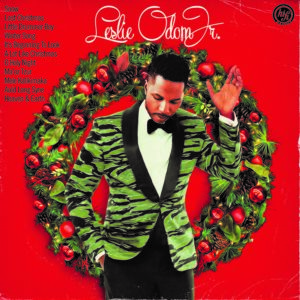 Broadway star, singer, actress, and Leslie’s wife, Nicolette Robinson, joins him on a traditional Chanukah song, “Ma’oz Tzur,” which pays homage to their own diverse, extended family coming together around the holiday season. By including a few non-Christmas songs on the album, Leslie’s goal was to spread the message of inclusion, stressing how important it is to respect and celebrate our differences, now more than ever.

Of the album, Leslie shares, “Man lemme tell you…we sang our hearts on this album. We needed to. I believe you’ll hear it and feel it when you listen.” The Christmas Album marks Leslie’s second holiday album following Simply Christmas, which he re-released in winter 2017 as a deluxe edition in winter with new arrangements and new songs. The holiday album hit #1 on iTunes and Billboard Jazz Charts.