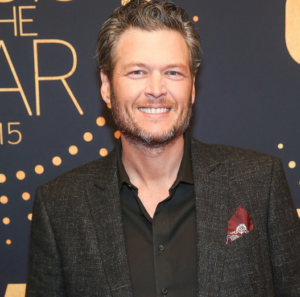 Happy Birthday, America! What’s hot in country right now? Well, the number one country music song on the billboard this week is “God’s Country,” by Blake Shelton. Charting for fourteen solid weeks, it is perhaps an appropriate song to commemorate the Fourth of July holiday. Praising God, church, and country, “God’s Country” particularly resonates with certain sectors of the population who are thankful for our distinctive American way of life.

Hailing from Ada, Oklahoma, singer-songwriter Blake Shelton began singing at a very young child. By the age of 12, he knew how to play the guitar, and at the age of 15, he had written his first song. After graduating from high school, Shelton headed to Nashville. Shelton released his first single “Austin” in 2001. It charted at number one for five weeks on the Billboard Hot Country Singles and Tracks (now known as Hot Country Songs), establishing Shelton as a breakout star. His career continued to grow with his first self-titled debut record, which also included the “All Over Me,” and “Ol’ Red.” (1)

With the release of each subsequent single and album, Shelton’s career has gone from strength to strength. His powerful performance of “God’s Country” at the Country Music Awards on April 7th packed quite a punch, as girlfriend Gwen Stefani cheered him on from the audience. “God’s Country” represents Shelton’s 36th top 100 Hot Country Song! (2)

For more information about Blake Shelton, or to purchase his new single “God’s Country,” please go to http://apps.blakeshelton.com.

Chase Rice is Most Added with “Lonely If You Are.”

Entertainers to Entrepreneurs
Scroll to top