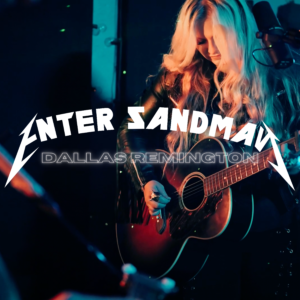 Rising Country songwriter and performing artist, Dallas Remington, known for her energy and ambition, has released a new live acoustic version of the Metallica hit song, “Enter Sandman,” to digital music platforms.  The song was Metallica’s biggest radio hit, and it’s considered their signature song, which was written by Kirk Hammett, James Hetfield and Lars Ulrich. Production, engineering, mixing and mastering of Dallas’ version was by Corey Lawson at Claw Sound Studios. Studio musicians on the project included drums and percussion  by Dave Ryan, acoustic guitar Jeff Duke, Dobro was played by Lance Martin and acoustic guitar and vocals were by Dallas Remington. “Enter Sandman” is available on all digital streaming and download platforms at smarturl.it/entersandman_DR.

“It was really exciting to be able to work with Dallas and put a fresh spin on a classic song. Adding something new, while still keeping true to the original,” shared band member, Jeff Duke

“My life has always revolved around country music but for a while growing up, I was actually the bassist in a metal band! One of my favorite songs we played was “Enter Sandman” and I have been wanting to make a countrified version ever since!” stated Dallas Remington.

Sometimes you just have to have some fun and that’s exactly what Dallas Remington and her band did with their LIVE Acoustic version of “Enter Sandman”! This dobro and acoustic guitar driven recording of this classic song will take you back to your hair band phase and may bring back the memories of listening to Metallica while your parents weren’t around. “Hush little baby, don’t say a word…”

About Dallas Remington:
Dallas Remington is a no-nonsense country recording artist and songwriter who knows who she is and what she wants. The Kentucky-born, fifth generation farming family member who started performing in Nashville at age 11 and moved to Nashville at the age of 15, thrives with a passion for life, her music, and her faith. Dallas’ vocal talents are marked by her striking lyrics and textured phrasing; her fiery verve and vigor comes to life in every performance, intimate or live. Her passion for playing the guitar and performing began at an early age, around nine years old, however she regularly plays a variety of instruments with guitar and bass as her primary focus. “Singing will always be a part of me. Whether I’m singing at church, on the street, on a flatbed trailer, or somewhere in Nashville, I love every minute.” she stated. In 2020, amidst the Covid-19 pandemic, Dallas released a song dedicated to her father and all essential employees – “Uncommon Man”. It has since crossed 600k organic streams on Spotify and charted #43 on the Billboard Country  Indicator Chart as well as #24 on the MusicRow Country Breakout and #4 on the CDX True Indie Chart! A Dallas Remington performance includes a variety of songs, from her originals like “Uncommon Man”, “Found Her Freedom” (MusicRow Breakout Chart Top 60), “Never Turned Around”(#37 MusicRow Breakout Chart), “Boy In A Band” (#41 MusicRow Breakout Chart), and “Huntin’ Season” (#32 MusicRow Breakout Chart & #9 CDX True Indie.)  Pre-pandemic, Dallas played an average of 100+ shows and events a year, including solo and full band sets. Dallas and her band actually closed out the 2020 Houston Livestock Show & Rodeo just a few days before the Covid shutdown.

Singer-Songwriter Alannah McCready Spreads Holiday Cheer with Rendition of “The...
Scroll to top