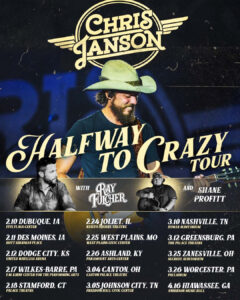 Once described as a “live legacy in the making” (Rolling Stone), country music star and acclaimed entertainer Chris Janson is now cementing his place in touring history. Today he announced his headlining “Halfway to Crazy” Tour, spanning 15+ dates through April (with more to come). Named to Bobby Bones’ personal list of greatest performers in country music, Janson will hit auditoriums, theaters and, for the first time, arenas across the nation. Joining him on the run are hit-making singer / songwriter Ray Fulcher and up-and-comer Shane Profitt. Fan club members can purchase tickets beginning this Wednesday, Nov. 17, followed by the public on-sale on Friday, Nov. 19 at 10:00 a.m. local. See below for details.
“I’m super excited to hit the road in early 2022,” Janson said. “It’s been incredible to be back in front of an audience again this year, with crowds more hungry and grateful for live music than ever before. Whether you’re a fan or an artist, there’s nothing like a seeing a live show. I can’t wait to see everyone on the ‘Halfway to Crazy’ Tour and to maybe play y’all some new music that I’ve got coming real soon…”
Fans at each show can expect to hear all their party-starting favorites, from Janson’s 3x Platinum smash “Buy Me A Boat” to his three other No.1 smash hits. He is also due to preview songs from his forthcoming album, due in early 2022. The to-be-announced project features flagship single “Bye Mom” (listen HERE), currently climbing the charts at country radio. MusicRow has praised the song as “achingly lovely” and described it as “tapping into a universal truth.” What began as a tribute to his friend and co-writer’s mom, who passed late last year, has turned into a “masterfully written story song” (Taste of Country) about loving someone more than yourself.
This past week, in honor of Veteran’s Day and Military Family Appreciation Month, Janson took the message of “Bye Mom” to heart. He teamed up with Bass Pro Shops for a “round-up at the register” campaign to help fund 20+ scholarships (a minimum of $100,000) for the spouses and children of fallen and disabled service members via national nonprofit organization Folds of Honor. Janson appeared this weekend on Fox & Friends to perform “Bye Mom” and talk about the life-changing initiative.
Over the past six years as a Warner Music Nashville recording artist, Janson has spread “Good Vibes” while collecting four chart-topping singles, seven billion airplay impressions, more than 1.5 billion on-demand career streams and several major industry awards. He has become as well known for his hits as his “crazy harmonica skills and… riveting stage stye” (People) that have earned him praise from fans and critics alike. The Grand Ole Opry “wild child” (The New York Times) recently performed at the esteemed organization’s 5,000th show celebration, earning coverage in People, Forbes, The Tennessean and more.
https://nashvilleinsider.tv/wp-content/uploads/2021/11/chris-janson-2021-tour-dates.jpg 653 980 Michael Glynn https://nashvilleinsider.tv/wp-content/uploads/2018/04/logo-yes.png Michael Glynn2021-11-15 22:16:062021-11-15 22:53:40CHRIS JANSON ANNOUNCES HEADLINING “HALFWAY TO CRAZY” TOUR, BEGINNING FEBRUARY 2022
0 replies