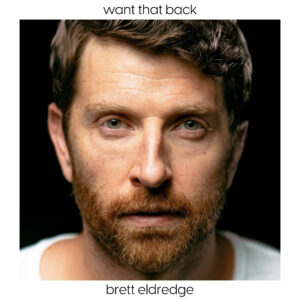 Brett Eldredge is kicking off the new year by sharing more new music with the release of “Want That Back” (LISTEN HERE) and its official music video, making a broadcast premiere on CMT, CMT Music and ViacomCBS Times Square Billboards today (WATCH HERE). Co-written with Scooter Carusoe, the lyrics harken back to a time when life was simpler, more care-free, and you could see happiness in the little things all around.
“I woke up at 3:33 one night and was feeling the weight of everything going on in the world,” explained Eldredge. “From the pandemic, to the hate and the violence – all these different things made me crave the pure and simple parts of life that I miss. I was looking for comfort in these moments that I feel bring purpose into my life. It was just such a powerful feeling that overtook me and I couldn’t go back to sleep until I wrote the whole chorus.
“Want That Back” follows the surprise Christmas Eve release of “Holy Water” (LISTEN HERE) a special gift from Eldredge to his fans. Rolling Stone praises the “grand piano number that shows off the Chicago-area native’s range” and its “tones of hope and redemption.”
“To me, ‘Holy Water’ represents the cleansing of the spirit,” Eldredge shared. “You can find it in ways by recognizing the love for yourself, for being there for yourself, and protecting that inner child. This is a huge power that we all have and it exists deep down in our hearts. You can also find it through someone who is there for you through every up and down through the walk of life. They are your holy water. Whatever your beliefs are, you can go to a spiritual place – and hopefully this song can take you there. Recording this was incredibly vulnerable for me, and the production from Dave Cobb is fantastic.”
The Platinum-selling recording artist most recently released his brand-new holiday album, Mr. Christmas. Eldedge celebrated the launch with multiple TV appearances including performances on The Late Show with Stephen Colbert, Good Morning America, Disney Parks Magical Christmas Parade, Kelly Clarkson Presents: When Christmas Comes Around, The Wonderful World of Disney: Magical Holiday Celebration and CMA Country Christmas.
Mr. Christmas followed his highly celebrated debut Christmas album, Glow. In 2016, the project inspired a single live show in Nashville, which has now grown into the beloved Glow LIVE holiday tour. A feel-good annual tradition for many, Glow LIVE has made multiple stops for capacity crowds in major cities across the country, including back-to-back sold-out nights at Nashville’s legendary Ryman Auditorium.
These latest releases follow his seven country-radio No. 1’s, nine Gold and Platinum-certified singles, two Gold-certified albums, multiple CMA, ACM and CMT Music nominations and wins and most recently, his critically acclaimed fourth studio record, Sunday Drive. With help from GRAMMY-winning producers Daniel Tashian and Ian Fitchuk, Eldredge brought the album to life by leaning into vulnerability and pulling inspiration from his own personal experiences.
https://nashvilleinsider.tv/wp-content/uploads/2021/09/Brett.jpg 801 1200 Michael Glynn https://nashvilleinsider.tv/wp-content/uploads/2018/04/logo-yes.png Michael Glynn2022-01-15 20:05:542022-01-15 20:13:52BRETT ELDREDGE LONGS FOR LIFE’S SIMPLE JOYS IN NEW SONG “WANT THAT BACK” OUT NOW (LISTEN HERE)
0 replies