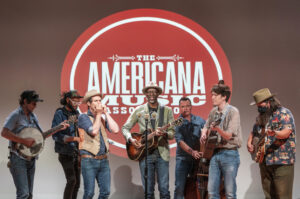 A full list of categories and nominees for the Americana Music Association’s 20th annual Americana Honors & Awards is below:

DUO/GROUP OF THE YEAR:
Black Pumas
The Highwomen
Our Native Daughters
The War and Treaty
Gillian Welch and David Rawlings

The winners of each category will be announced during the Americana Honors & Awards on Wednesday, Sept. 22, 2021 at the historic Ryman Auditorium in Nashville, Tenn. The celebrated program is the hallmark event of AMERICANAFEST, which returns for its 21st year on Sept. 22-25, 2021.

Every year, the Americana Music Association honors distinguished members of the music community with six member-voted annual awards and Lifetime Achievement Awards including the NMAAM co-presented Legacy of Americana Award, which will all be announced leading up to Americana music’s biggest night.

“We’re delighted to see our incredible membership recognize such an array of talent,” said Jed Hilly, Executive Director of the Americana Music Association. “Every one of these musicians is a trailblazer in their own right, and I’m thrilled to see that these nominees and their works have resonated so deeply within our community.”