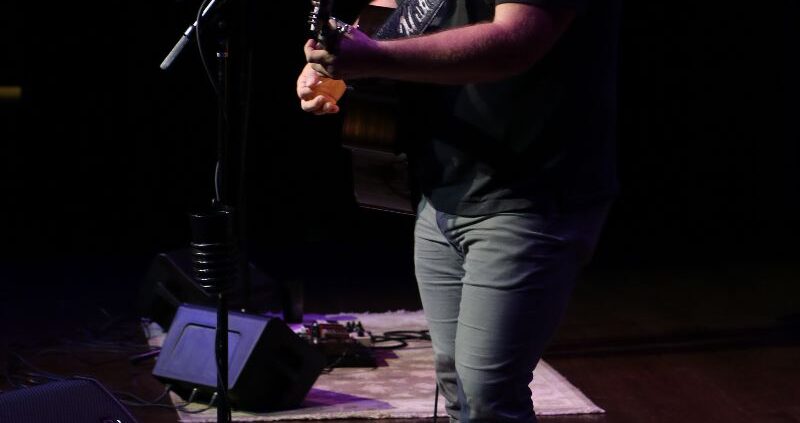 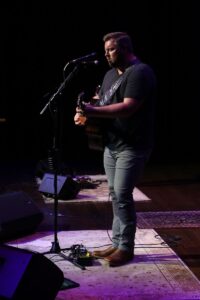 NASHVILLE – It was a homecoming weekend filled with firsts for Vere Music singer/songwriter Matt Rogers in Eatonton, GA. He was the first artist to perform three capacity shows on the recently refurbished stage at The Plaza Arts Center. He conducted the first songwriters master class for area music students since TPAC reopened. And he was the first artist to perform for residents of a local nursing home after months of isolation due to COVID-19.

“Honestly, it was a whirlwind, but I wanted to make the most of it,” Rogers said. “It felt great to be home and spend time with the people I care about. Like so many other musicians, I have missed performing for an audience – and there is nothing like a hometown crowd.”

“We could not have scripted a better opening event by hosting Matt’s homecoming,” said Vickie Spivey, Program and Production Director at TPAC. “He was so engaging and captured the hearts of seasoned and first-time patrons here at the Plaza. Matt spoke honestly about his inspiration and the value of being raised here in Eatonton and the impact the people in the audience had on his songwriting.”

Originally a schoolhouse built in 1916, TPAC is the cultural hub for live performance and music education in the region. In addition to performing three-nights at the 500-seat theater, Rogers instructed high school students on the basics of songwriting. Rogers has penned songs with some of the best tunesmiths in Music City and has won numerous songwriting awards.

“I think the master class with Matt is a huge thing. We have kids here who want to do big things and who are capable of it, but maybe need someone on their side,” said Taylor Hembree, Marketing Director of TPAC. “With Matt’s impact on the community and his talents, these kids will not only know someone is rooting for them, but they will get a chance to get some insight into the music scene. As someone who grew up being told to follow my dreams, I am very grateful that Matt is taking the time out to talk with area kids. I know it means a lot to The Plaza and to the community.”

In addition, Rogers also performed for residents and staff at the Harbor at Harmony Crossing. Residents of the nursing facility, many of them veterans, had been isolated during the pandemic.

The Durango Boot ambassador has reached a growing, global audience with his raw, country-at-heart/blues-in-his-soul style thanks to performing weekly since 2018 at Ole Red in Nashville and an extensive tour schedule across the U.S. Known for his energetic stage performance, the Georgia native Is headlining the Georgia Peach Festival on June 12.

Rogers has been releasing music since moving to Nashville in 2017 including his critically acclaimed sophomore EP, Richest Place On Earth. His single “Peaches and Pecans” from the project pays homage to the Peach State and was a popular anthem at University of Georgia home games at Stanford Stadium during their 2018 standout football season. In 2019, Rogers’ buzz-worthy single “Burn The Boat” made waves when it landed on Buzzfeed’s “Top 10 Hottest Country Summer Jams” alongside songs by Luke Combs and Carrie Underwood.

Fans and the industry are taking notice including country music legend TG Sheppard, who opined that Rogers is “the real deal…the total package. A great singer, a great picker, and a great songwriter.”