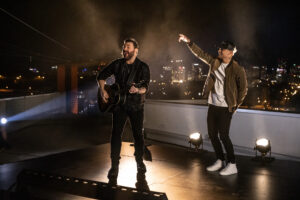 On learning the news, Chris shared to socials: “Finding out you have the number one song in Country Music is such a crazy feeling. My career started with a #37 #52 #37 in that order. If you had asked me if I ever thought I’d be celebrating my 12th number one… just wow… no words. @kanebrown_music so proud to share this one with you brother! Thank you to anyone reading this, @coreycrowder @carybarlowe (my co-writers and CC is my coproducer) , and all of Country Radio for sending this one to the top!!! #FamousFriends  #numberone.”

Written by Chris with Cary Barlowe and Corey Crowder from a headline tour stop in Tampa in 2018, the autobiographical song mentions Rutherford County, where Chris grew up in Tennessee, and Kane’s hometown of Hamilton County along with Nashville’s Davidson County – a.k.a. Music City. In addition to the Mediabase No. 1 this week for “Famous Friends,” the song took home the trophy for Collaborative Video of the Year at the CMT Music Awards and is already a No. 1 smash on SiriusXM’s The Highway, Music Row’s CountryBreakout radio chart and a 3-week No. 1 on Canadian country radio.

An anthemic tribute to the names, faces, and legendary stories that make up each hometown, “Famous Friends” is Chris and Kane’s first collaboration since working together on Kane’s 2017 song “Setting the Night On Fire.” Additionally, the song reunites the former tour mates from Chris’s 2018 Losing Sleep Headlining Tour — which included a sold-out hometown show at Nashville’s Bridgestone Arena — and is a full-circle moment since Kane’s first live concert experience as a young Country fan was a Brad Paisley and Chris Young tour stop.

With nearly five billion career streams in addition to his twelve No. 1 singles, Chris is also getting ready to release his highly anticipated 8th studio album – Famous Friends – on August 6.  Led by the chart-topping title track with Kane Brown, the 14-song project features several more of Chris’s famous friends, including collaborations with Lauren Alaina and Mitchell Tenpenny, plus background vocals from Sarah Buxton and Hillary Lindsey. Chris Young’s upcoming Famous Friends album is available at https://CY.lnk.to/FamousFriends and starting this Friday, you can listen to new song “One Of Them Nights” when you pre-order/pre-save the record.