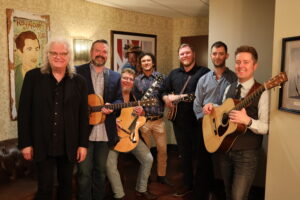 Ricky Skaggs has added new Kentucky Thunder band members to its roster of first-rate musicians with Mike Rogers performing tenor vocals and playing rhythm guitar and Billy Contreras on fiddle. This comes as Paul Brewster retires from the band and Mike Barnett recovers from a brain aneurysm sustained in 2020.

Rogers is a vocalist and a multi-instrumentalist, which includes playing drums, acoustic guitar, banjo, and steel guitar. In the past, he has performed as a band member of multiple country and bluegrass acts, including Kevin Denney, Craig Morgan, and Doyle Lawson. Rogers is also a songwriter and producer, having penned songs for Morgan, Doyle Lawson & Quicksilver, The Lonesome River Band and Jimmy Fortune, and producing Fortune’s album, Lessons.

Contreras is a fiddler as well as an educator, session player, arranger, and producer. He studied with Buddy Spicher and Rachel-Barton Pine and has performed or recorded with a host of talent including Lionel Hampton, George Jones, Doc Severinsen, Hank Thompson, Hank Jones, Crystal Gayle, Grady Tate, Charlie Louvin, Al Grey, Ray Price, the Cincinnati Pops Orchestra, and the Nashville Symphony, along with teaching at Belmont University in Nashville, Tennessee.

As both Rogers and Contreras are welcome additions to Kentucky Thunder, missing from the lineup will be long-time band member Paul Brewster, and for now, Mike Barnett.

Brewster was with Ricky Skaggs and Kentucky Thunder for 26 years, winning many GRAMMY® and IBMA awards during his tenure with Skaggs and the band.

“As Paul’s been with me for more than 25 years, he made a huge impact in the sound and makeup of Kentucky Thunder,” says Skaggs. “He’s one of the best tenor singers in bluegrass music, a first-class musician and a good friend. Paul is a wonderful Christian brother as well, which has been more important to him than his great singing gift. His presence on stage and off will be missed!”

Fiddle virtuoso Barnett’s career includes a GRAMMY® nomination for his highly acclaimed album Portraits in Fiddles. The gifted band member is working towards recovery from a brain injury which occurred in the summer of 2020.

“Our hearts were heavy upon hearing the news of Mike’s brain aneurysm back last summer,” explains Skaggs. “He has overcome so much and is working hard towards recovery. We can’t wait to see him get back to fiddling, of which he is a master at such a young age. My wife Sharon and I, along with the band and crew, look forward to seeing him perform again soon and all of our prayers are with him at this time for God to heal him completely.”

“We congratulate Paul on his retirement and wish him all the best and our thoughts and prayers are with Mike during this phase of his recovery,” adds Skaggs’ longtime manager Charlotte Scott.

About Ricky Skaggs
Earning 12 #1 hit singles, 15 GRAMMY® Awards, 13 IBMA Awards, nine ACM Awards, eight CMA Awards (including Entertainer of the Year), two Dove Awards, the ASCAP Founders Award, three honorary Doctorate degrees, inductions into the Country Music Hall of Fame, IBMA Bluegrass Music Hall of Fame, National Fiddler Hall of Fame, Musicians Hall of Fame, and GMA Gospel Music Hall of Fame, the 2013 Artist-In-Residence at the Country Music Hall of Fame® and Museum, an Americana Music Association Lifetime Achievement Award in the Instrumentalist category along with countless other awards, Ricky Skaggs is truly a pioneer of Bluegrass and Country music. Since he began playing music over 60 years ago, Skaggs has released more than 30 albums and has performed thousands of live shows. He started his own record label, Skaggs Family Records, in 1997 and has since released 12 consecutive GRAMMY®-nominated albums. His latest release, Hearts Like Ours, with his wife, celebrated artist Sharon White of The Whites features the couple dueting on handpicked country love songs. And the Grand Ole Opry member has released his first-ever autobiography, “Kentucky Traveler.” The book details the life and times of Skaggs and provides a descriptive history of Country and Bluegrass music, as told by the master himself. In addition to his regular touring schedule with his band, Kentucky Thunder, he has added country tour dates as he plugs in and plays full shows of his chart-topping hits. Skaggs was a 2020 recipient of the National Medal of Arts, the highest award given to artists and arts patrons by the United States government.
https://nashvilleinsider.tv/wp-content/uploads/2021/07/Skaggs_KentuckyThunder-scaled.jpg 1707 2560 Michael Glynn https://nashvilleinsider.tv/wp-content/uploads/2018/04/logo-yes.png Michael Glynn2021-07-29 20:59:032021-07-29 21:09:40RICKY SKAGGS REVEALS NEW KENTUCKY THUNDER BAND MEMBERS
0 replies